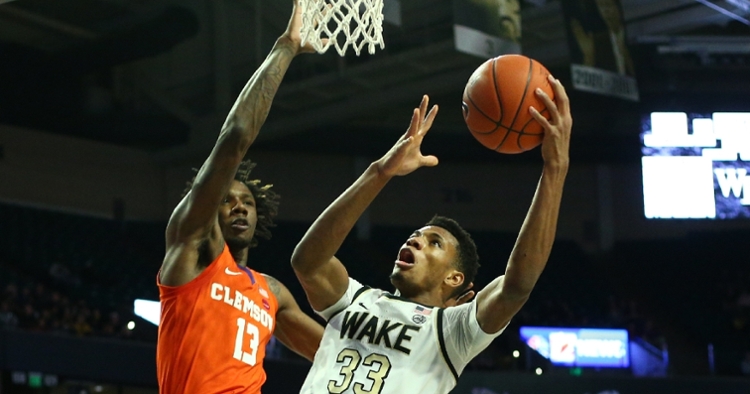 Clemson was held to its lowest scoring output of the season in a 56-44 loss at Wake Forest on Saturday.

The Tigers’ lack of offensive flow and untimely turnovers kept them from completing the comeback, however, finishing shooting 30.5 percent from the field with 15 turnovers.

Clemson missed its first six shots after the tip-off and that was representative of an ugly first half for both teams, where Wake Forest (10-11, 3-8) held a 3-point edge.

The Tigers had a nearly seven-minute drought at one point and still took a 10-9 edge on an Aamir Simms and-one to break the run. Each side hit a lone 3-pointer and combined to go 2-for-20 there in the first 20 minutes.

After scoring 32 points in a win over Syracuse Tuesday, Tevin Mack was held to only two on 1-of-9 shooting.

The Tigers' previous low scoring total was 45 points in a home loss to Yale earlier this season.

The loss broke a run of seven consecutive wins over Wake Forest for Clemson.

"Tonight was very disappointing. That was a poor offensive performance by us. I thought we started the game off well against the zone. We needed to knock down more shots. We also needed to drive it more. We needed to move, attack gaps and make plays."

"[Wake Forest] probably made an adjustment or two after our guys got confidence from knocking down some early shots. Our guys have to do a better job of playing out of concepts and making reads. I thought we made poor passes tonight. We didn't help ourselves with our passing. I told our players after the game that I thought we fought really hard. Defensively, we were better than when we beat [Wake Forest] at home.

On his takeaways from Clemson's performance:

"There are still offensive woes with this team. Nobody could get a hot hand for us. Our defense was good enough. We guarded [Brandon] Childress really well. [Andrien] White made a couple of big threes against us, but we should've had a chance to win. Sometimes, it's just a make-or-miss game. You've got to make shots, and we couldn't make enough shots to put game pressure on Wake Forest.

Clemson-Wake box
ONE DAY ONLY! Fanatics.com Black Friday Sale 20% off on orders over $75
Comment on this story