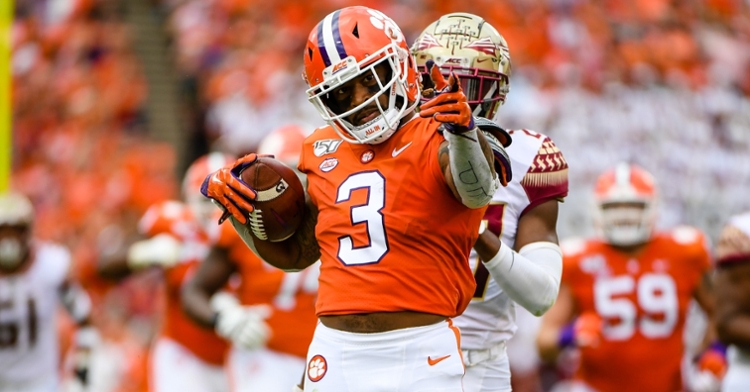 Clemson held its annual CLEMMYs over social media Friday for the standout performances of the sports season.

“Many outside observers feared Amari Rodgers would be lost for the 2019 season when he tore his ACL in his high knee in late March," Rodgers' nomination letter said. "Instead, Rodgers’ dedication and perseverance in his rehab led to his return to game action only 166 days after his injury when he played in Week 2 against Texas A&M. One week later, he caught four passes for 121 yards and two touchdowns in a win at Syracuse, including an 87-yard catch-and-run for a score that tied the fourth-longest pass play in Clemson history. He earned team offensive player of the week honors for the performance.

"He collected honorable mention All-ACC honors at both wide receiver and all-purpose slots in 2019, catching 30 passes for 426 yards and four touchdowns while also rushing twice for 50 yards and a touchdown in 453 offensive snaps in 14 games (10 starts)."

The top moment went to men's basketball snapping the streak in Chapel Hill and the record-breaking performance went to Travis Etienne, who also participated in the top game with the Tigers topping Ohio State in the Fiesta Bowl.

Check out more awards and a season highlight video below:

?Congratulations to our #CLEMMYs Winners! ????

Congratulations to our #CLEMMYs Winners! ????

Congratulations to our #CLEMMYs Winners! ????

Here were the nominees for some of the awards:

?Today, we’re celebrating our amazing student-athletes by announcing the winners of this year’s #CLEMMYs! ? ?These awards cover the spring 2019, fall 2019 and winter 2019-20 seasons.? ?And the nominees are... ?Winners will be shared later this evening! #ClemsonFamily ?????

This award was made for @arodgers_3! Won’t find a more determined person on our team. https://t.co/0v0RLsZOAP

Memories guaranteed to put a smile on your face! ?? pic.twitter.com/P523Zp5Kq4