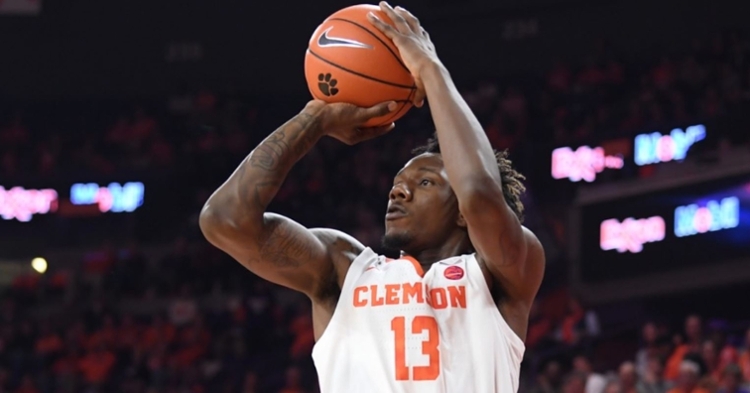 Clemson used some hot-shooting from beyond the arc to put some distance between them and the Blue Hose early.

Clemson bounced back in its second home game in three days to start the season with a 79-45 win over Presbyterian College (0-1).

The Tigers (1-1) opened their 2019-20 campaign with a 67-60 loss to Virginia Tech on Tuesday, where the shooting went cold in the second half — especially from beyond the perimeter (1-14 on 3-pointers). A strong start from the now-extended 3-point line guided Clemson pulling away with ease by the half.

The Tigers hit eight of their first 16 3-point attempts to go up 38-21 late in the first period. Clemson guard John Newman then built on a strong season opener (15 points) by going to the rim for a basket-and-foul and then a dunk to close it out and lead 43-21.

Newman hadn’t scored in double-figures at the collegiate level going into his sophomore season and has managed to do it in back-to-back games, totaling 16 points on 6-of-9 shooting on Thursday.

The hot 3-point shooting extended into the second-session as the lead quickly ballooned to 29 points after treys from Newman, Tevin Mack and Chase Hunter not even three minutes in. Clemson finished shooting 41.2 percent from beyond the perimeter (14-34).

The Tigers extended their winning streak to nine games over the in-state Blue Hose, holding a 58-18-1 advantage in the series.

Freshman Alex Hemenway left the court and was escorted to the locker room with an apparent leg injury with 10 minutes left in the second half. He was on crutches with a wrap on his foot later in the game. Hemenway had scored six points on 2-of-2 3-point shooting.

Clemson continues its homestand on Sunday versus Colgate at 3 p.m. (ACCNX), a team that won the Patriot League and lost in the first round of the NCAA Tournament to Tennessee last season.

“Good performance by our guys, pleased with the way they bounced back. It was an emotional game the other day and it didn’t end the way we wanted. To get our spirits back and get focused and play well was the goal, and I think our guys really met that. I feel like they were very focused yesterday, we had good meetings and walk-throughs, and they were excited to get back out here and compete and that’s what I really like about this team.”

“Defensively we were very solid, and kept them in front of us and made them take some tough shots. Overall it was a great game and it was good to see some guys bounce back.”

“His job [tonight] was the leadership he showed in the day prior to this game. I thought he was a very good leader yesterday. He had our guys in a good frame of mind and had them focused and they are certainly looking at him for those types of things.”

“I don’t think there was much of a difference. I think we came out with the same focus. It’s just the game Tuesday gave us more of an incentive and a different sense of urgency. We got a lot of guys that can shoot, and more shots fell tonight.”

“The game Tuesday left a sour taste in our mouths. It gave us more of a sense of urgency to play better. My focus was on rebounding and grabbing every rebound that I could get, and it also set the tone for my offense.”

On his acclimation to the team as a transfer:

“For me, it has just been helping other guys out, especially with all the young guys we have. Trying to just share knowledge with them and helping them out. Even though I have played college basketball for a long time, I haven’t been in this system for a long time, and we are all coming into this together.”

On splitting time at both guard positions:

“I came to Clemson to help us win and help the team be successful, and if splitting time at the two positions is what Coach Brownell needs me to do, then it is something that I will step up and do. It has been an adjustment, but it is something I am getting more comfortable with as we go along.”

Clemson-PC box score
Get the All-New Clemson Nike Shoe before it sells out!
Comment on this story