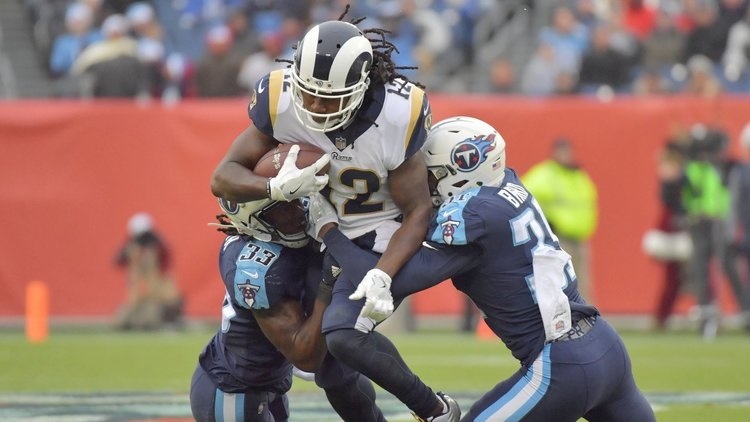 The playoff picture in the NFL has settled for a number of former Tigers, but some postseason chances and positioning goes into the final week.

The Seattle Seahawks and Byron Maxwell, who posted five tackles, a forced fumble and pass breakup Sunday in a win at Dallas, are fighting for the final NFC playoff spot with the Falcons and Clemson contingent Vic Beasley (2 tackles, TFL vs. New Orleans Sunday) and Grady Jarrett (6 tackles, 4 solo). Atlanta holds the head-to-head advantage, hosting Carolina and the Seahawks hosting Arizona Sunday.

For Kevin Dodd (1 tackles v. LA Rams Sunday) and the Tennessee Titans (8-7), they are currently in the final AFC playoff place, but another loss to Jacksonville in their skid to the finish Sunday opens the door for the LA Chargers (8-7 v. Oakland) and Mike Williams or Buffalo (8-7 at Miami; Clemson product Shaq Lawson on injured reserve).

Sammy Watkins notched a sixth touchdown reception in his last eight games as the Rams clinched the NFC West Sunday to open the postseason with a home game (third or fourth seed).

In Minnesota, the Vikings and former Tiger DBs Mackensie Alexander (2 tackles, 1 TFL in a 16-0 win over Green Bay Saturday) and Jayron Kearse (1 tackle) are line to clinch a first-round bye as the two-seed.

Back in the AFC, Dwayne Allen (2 catches for 26 yards Sunday) and New England have the edge in clinching home-field throughout the playoffs over the Steelers, which kept their hopes alive by dominating in Houston Monday – Martavis Bryant contributing three catches for 60 yards. The Patriots close with a home game versus the Jets and the Steelers need a loss there and a win over Cleveland.

Former Tigers defensive tackle Jarvis Jenkins rounds out Clemson’s postseason contributors with the Chiefs, last recording a tackle (3) in a win over Oakland on Dec. 10.

Quick hits: With an incredible juggling act (see below), DeAndre Hopkins closed out his home regular-season slate with a touchdown in every game (11 total in home games). He finished with four catches for 65 yards in six targets. In a tough day for the defensive side, Carlos Watkins got the start and notched two stops. Marcus Gilchrist posted one tackle…Dolphins linebacker Stephone Anthony put up a TFL in a road loss at Kansas City. Miami DE Andre Branch added a stop as well…Redskins cornerback Bashaud Breeland totaled four tackles and a pass breakup in a win over Denver…Giants rookie running back Wayne Gallman saw 16 touches with 18 rushing yards and 44 receiving yards in a loss to Arizona. On the other sideline, Jaron Brown caught two balls for 27 yards in a four targets…Jets kicker Chandler Catanzaro hit his one attempt, an extra point, in a 14-7 loss to the Chargers…Colts DB T.J. Green posted five tackles (four solo) in a loss at Baltimore…Bucs receiver Adam Humphries logged three catches for 51 yards in three targets in a loss to Carolina…49ers punter Bradley Pinion landed two of his three punts inside the 20 in a San Francisco win over Jacksonville.

Adam Humphries has joined Dwight Clark as only receivers in Clemson history to have consecutive NFL seasons with at least 50 catches without having a 50 catch season at Clemson.

#Texans WR DeAndre Hopkins has produced 55-or-more scrimmage yards for the 9th-straight week, the 3rd-longest active streak in the NFL and the only WR to do so this season

The only players in @NFLhistory to record more: