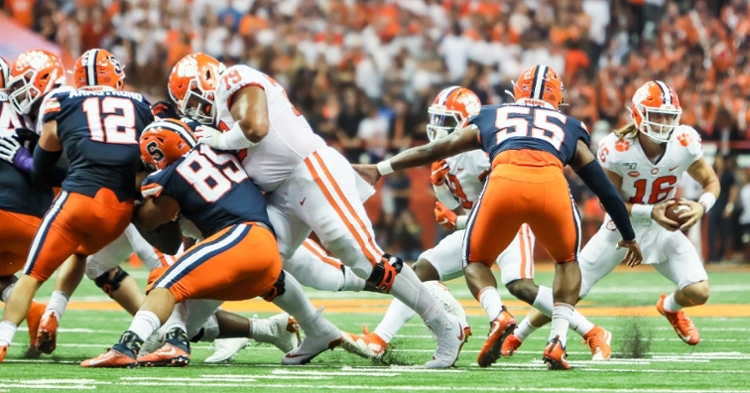 NEW YORK (Nov. 19, 2019) — The Joe Moore Award announced its annual selection of the semifinalists representing this year’s Most Outstanding Offensive Line Units in college football. The Joe Moore Award has presented the unique award since 2015. The ten semifinalists include No. 5 Alabama, No. 3 Clemson, No. 4 Georgia, Kentucky, No. 1 LSU, No. 2 Ohio State, No. 8 Oklahoma, No. 6 Oregon, Washington, and No. 14 Wisconsin.

“There was healthy debate this year which required a thorough reexamination of game tape,” said Cole Cubelic, SEC Network sideline analyst and Chairman of the Joe Moore Award Voting Committee. “We also solicited the opinions of more than thirty head coaches that had personally faced the O-line units under consideration. This award matters to the O-line community and the voting committee doesn’t take that responsibility lightly.”

“What’s fascinating is to see how positively correlated tough, physical, well-coached O-line play is to winning football,” said Aaron Taylor, CBS college football analyst and co-founder of the Joe Moore Award. Taylor played guard at the University of Notre Dame for the award’s namesake, the legendary offensive line Coach Joe Moore. “As the season winds down, performances in the “gotta have it” moments over the next couple of weeks should reveal all we need to know about which of these units is the Most Outstanding Offensive Line Unit in college football.”

Evaluations for semifinalists were made primarily through weekly review of actual game film and offensive line coach-provided cut-ups on the DragonFly Division I Network. In addition, Stats Perform (formerly STATS Inc.), one of the industry leaders in AI and sports data analytics, provides advanced O-line data and analytics to give context and clarity and to help streamline the film evaluation process.

· Clemson is ranked tenth nationally with 260.55 rushing yards per game.

· The Tigers are tied for fifth in the nation with 10 sacks allowed.

· Clemson is tied for thirteenth nationally with twenty-three rushes of twenty or more yards.

After the finalists are selected on December 10, a vote will be held to select the 2019 recipient of the Joe Moore Award by a voting body of 200-plus members. This voting body includes all of the current offensive line coaches at the Division I/FBS level, as well as former players, coaches, colleagues of Coach Moore and select media members.

In addition to reviewing game tape every week of the season, the Joe Moore Award voting committee will later go through each of the finalists’ season-long highlight reels and multiple back-to-back quarters of game film.

About the Joe Moore Award

The Joe Moore Award is named after Coach Joe Moore, widely regarded as one of the best offensive line coaches in college football history. He is most notably recognized for his work at Notre Dame and the University of Pittsburgh. Coach Moore sent 52 players on to the NFL, including Bill Fralic, Mark May, Russ Grimm, Jimbo Covert and others. The Joe Moore Award trophy, crafted by legendary sports sculptor Jerry McKenna, is the largest trophies in all of sports, standing at a height of 6 feet and weighing in at 800 pounds. The perpetual trophy is made available for display by the winning university until the conclusion of the following college football season.