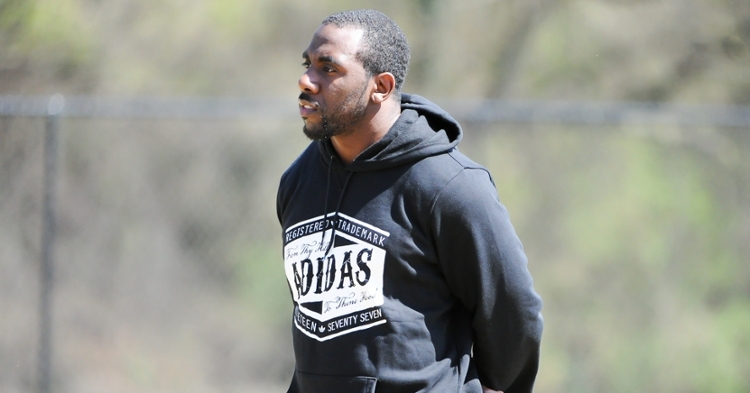 Spiller is set to be inducted into the Clemson Hall of Fame this fall.

Soon-to-be Clemson Hall of Fame inductee C.J. Spiller will now be there more often to pass on his knowledge to Clemson's running back group.

Clemson coach Dabo Swinney announced that Spiller is joining his coaching staff as a graduate intern.

"He’s going to get his Master’s in athletic leadership and we’re just excited about having that guy," Swinney said, who said Spiller approached him about wanting to get into coaching this week.

Spiller was named ACC Player of the Year in 2009 and was picked ninth overall in the 2010 NFL draft by the Buffalo Bills.

Spiller played eight seasons in the NFL and logged 3,451 rushing yards and 21 touchdowns.

More from his voluminous Clemson bio:

Overall: ACC Player of the Year in 2009, Clemson's first ACC Player of the Year since 1987 (Michael Dean Perry)...first offensive player from Clemson to be ACC Player of the Year since 1978 (Steve Fuller)...MVP of the ACC Championship game vs. Georgia Tech on December 5, 2009...unanimous first-team All-American as a kick returner, just the third unanimous All-American in Clemson history...finished sixth in Heisman Trophy voting, tied for highest finish in Clemson history (Steve Fuller 6th in 1978) and just the second top 10 finish in Clemson history...first-team All-American by Walter Camp as a kick returner and second team as a running back...first player in history of the Walter Camp AA team to be first or second team All-American at two positions in same year ...first-team All-ACC... named ACC player of the week four times this year, more than any other ACC player...the ACC's career leader in all-purpose running with 7588, he finished second in NCAA Division I history...first player in ACC history with at least 1000 yards rushing and 500 receiving, he finished with 1212 rushing and 503 receiving...broke ACC record for all-purpose running yards per game with 191, the record had stood since 1968...only player in the nation with a touchdown in every one of his team's games this year, 14 in a row....went over 7000 career yards when he went 88 yards for a touchdown with the opening kickoff at South Carolina...that play was his seventh career kickoff return for a score, an all-time NCAA record...joins Reggie Bush as only players in college football history with 3000 yards rushing, 1500 yards in kickoff returns, 1000 in receiving and 500 in punt returns... finished with eight kick returns for touchdowns in has career, tied for the NCAA record....has set 31 Clemson records in various categories, including the record for all-purpose running, returns for touchdowns and many others...ranks third in Clemson history in career rushing...just the sixth player in ACC history with 3000 yards rushing and 1000 yards receiving in a career...had 21 career touchdowns of 50 yards or more...more than Tim Brown, Rocket Ismail or Reggie Bush, similar types of players, had in their careers...went past Reggie Bush on the all-time all-purpose yardage list when he had 312 yards against Florida State on November 7...one of two players nationally to have three 300-yard all-purpose running games in 2009...one of two players in Clemson history to account for a touchdown five different ways (punt return, kickoff return, reception, rush and has thrown a touchdown pass)....threw a scoring pass, caught a touchdown pass and ran for a score in win over NC State on November 14...only running back in the nation to do all three in the same game this year....ranks third in Clemson history in rushing, 12th in receptions, first in kickoff returns.... has recorded these numbers while serving three years as a part time player with James Davis....graduated in three-and-a-half years on December 17, 2009, he received standing ovation from Clemson Board of Trustees when he crossed the stage, first time that had happened for a student-athlete....made first-team Academic All-ACC in 2008 when he made the Dean's List....first Clemson running back to make first-team Academic All-ACC and first-team All-ACC on the field in same year in school history. ...rated among the top 16 players in the nation for the NFL draft by Mel Kiper...also a three-time All-American in track for the Tigers...first-team Strength All-American in 2008...had career best time of 6.58 in the 60 and 10.22 in the 100 meters.