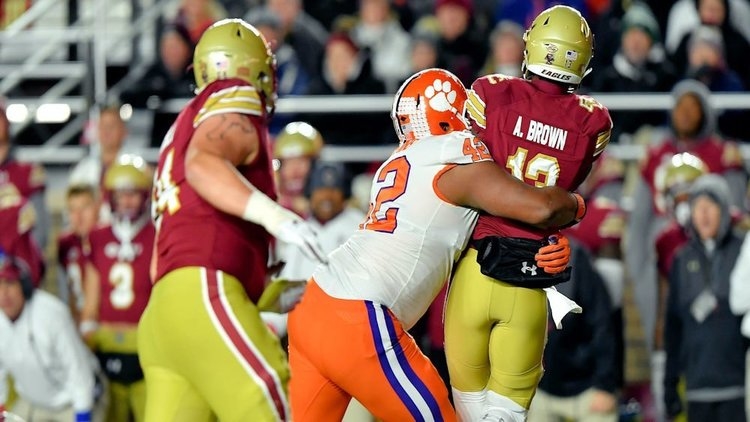 Boston College quarterback Anthony Brown was knocked out of the game after a big hit by Christian Wilkins on the opening drive in the first quarter of Clemson's 27-7 win.

Wilkins landed on top of Brown and the quarterback's right shoulder was driven into the ground.

The redshirt sophomore was in obvious pain and went straight to the locker room where he was ruled out for the rest of the game.

Before his injury, he was 2-for-3 for six yards as the Eagles' entire offense only mustered 113 total yards during the game against a stingy Clemson defense.

For the season, he has thrown for 1,573 yards and 16 touchdowns and only five interceptions.

During the post-game press conference, Boston College head coach Steve Addazio shared that his starting quarterback had been hospitalized with an "internal" injury.

"No, no. I don't think it's appropriate -- usually, I'm pretty straightforward about things, but I don't think it's appropriate for me to comment on something that I'm not sure that -- where his parents -- I'm not sure of all that right now," he said. "Suffice it to say that it's an internal deal in here, so -- and I know he's in the hospital, and I need to get my arms around that when I walk out of here."

Addazio feels for his starting signal-caller as he has previously had a torn ACL last November.