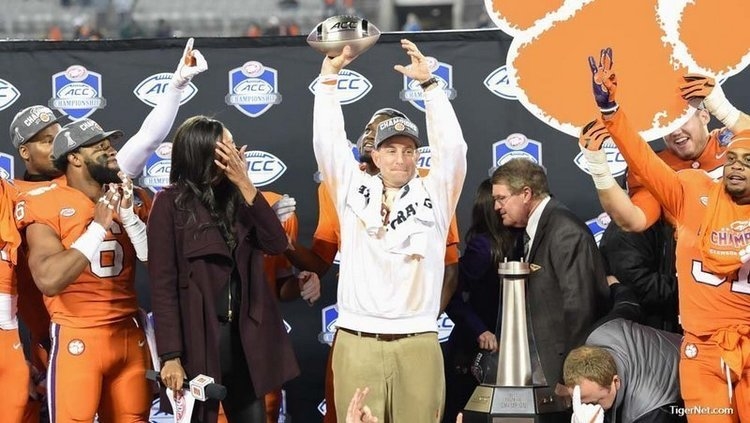 Dabo Swinney's Tigers are expected to win the ACC for a fifth-straight season and go undefeated in the regular season in back-to-back campaigns.

Clemson is expected to carry a preseason No. 1 ranking into 2019 after a second national title in three seasons this January.

And Athlon Sports doesn't see anyone standing in the Tigers' way to another undefeated regular season.

"The ACC enters 2019 with uncertainty in both divisions, but Clemson is once again a heavy favorite to win the league title," Athlon's Steven Lassan writes. "The Tigers top the Athlon ACC predictions for 2019, with Virginia, Virginia Tech and Miami locked into a tight battle for first in the Coastal Division. The conference has 10 teams projected to reach bowl eligibility, but only three teams ranked inside of the Athlon top 25 for 2019."

They see Virginia, which is coming off of a 28-0 win over South Carolina in the Belk Bowl, as a first-time Coastal Division champion.

"If Virginia claims the Coastal, seven different teams over seven years would have made a trip to the league title game," Lassan said. "The Cavaliers seem to be in good position to win their first Coastal title, as coach Bronco Mendenhall’s team returns one of the league’s top quarterbacks (Bryce Perkins) and a standout defense. However, Virginia has to get past rival Virginia Tech – a team it has not beaten since 2003."

Clemson's trip to Syracuse in week three is pegged as the must-see game of the ACC schedule.