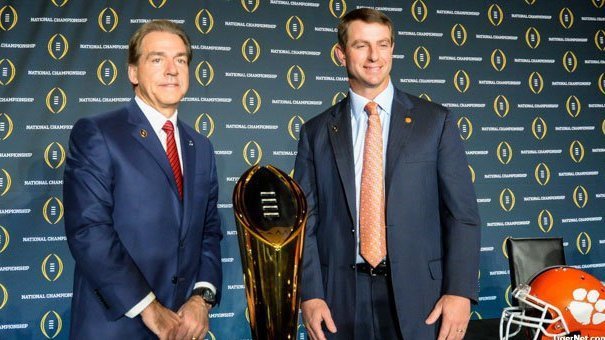 The next three weeks will be huge for Clemson football. By January 15th Clemson will know which underclassmen will be a part of the program in 2018. What will Deon Cain, Ray Ray McCloud, Mitch Hyatt, Christian Wilkins, Clelin Ferrell, Austin Bryant, Kendall Joseph, Van Smith and Mark Fields do?

But the biggest of bigs happens Monday in New Orleans and hopefully the following Monday in Atlanta.

This is what we have all wanted....The Trilogy.

Clemson and Alabama have come down to the final few plays of the game in each of the past two seasons, and I expect another classic New Year’s Day.

Also, I think both teams will be better in 2018 and in the next few years than what we will see Monday night. If I am right about that opinion, it speaks volumes that these two programs can send teams to the college football playoff in slightly rebuilding years.

How many programs can make the playoffs despite not being at their very best? Georgia is the third-ranked team this season, but it took decisions to come back for their senior seasons by stars like Nick Chubb, Sony Michel, Davin Bellamy and Lorenzo Carter. I doubt very seriously that the Bulldogs would be in Pasadena if those guys don’t come back.

Oklahoma is ranked second, but they are here because Heisman Trophy winner Baker Mayfield came back for his 17th season. I also doubt the Sooners would be in the Rose Bowl if their superstar quarterback skipped his senior season.

Clemson lost almost every underclassman that could go pro, and the Tigers are once again the number-one team in the country. Bama is back for the fourth straight year making them the only team to make the playoffs each year.

In my opinion, Alabama, Clemson, Ohio State and Florida State entered this season as the elite programs of college football over the last few seasons. FSU fell on its face and has exited from that elite class. Ohio State missed the playoff for the second time and is now on the fence. Oklahoma made their second playoff, and if the Sooners can win the title this season, they will enter that elite class.

Alabama has been the best program in college football. If Clemson beats the Tide for the second consecutive season and goes on to win back-to-back national titles, maybe that crown moves to the Tigers. If Clemson beats Bama but loses in the title game, then I think Bama still has a slight advantage over the Tigers. If Bama beats Clemson, the Tide surely hang on to that distinction. There is nothing that could happen Monday night that could move either out of the elite status though.

Finally, the way these two programs are recruiting, we could see more of episodes of Bama and Clemson and being more like George Lucas’ Star Wars or Sly Stallone’s Rocky instead of the three that Coppola or Ali-Frazier gave us.