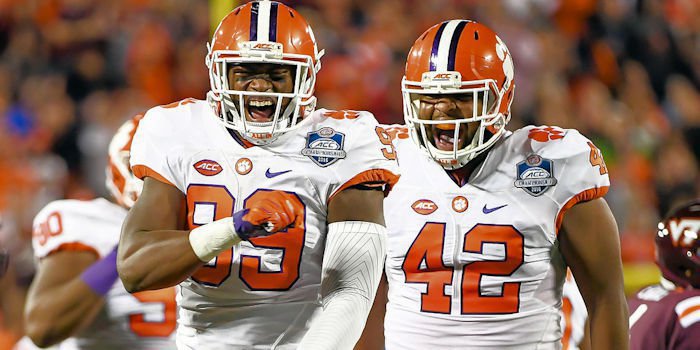 As I wrote last week, I have seen a bunch of games in this rivalry. However, few were as enjoyable as what we saw Saturday night in Columbia.

South Carolina put a lot into this game and called it a measuring stick for its program, but Clemson sent a message early and kept its foot on the rivals’ throat until the fourth quarter.

The 34-10 win said a lot about the big picture in comparing these two programs. We found out experience in big games matters. South Carolina had a big atmosphere heading into the Kentucky game and got whipped in September, but it had tried to convince itself that a weak SEC schedule was not the reason for its 8-3 mark heading into this game. They laid an egg for the second time in big games at home.

Meanwhile, Clemson is built for big games. This is a program that looks very comfortable in big game atmospheres. Clemson is 15-1 at night over the last two seasons, with eight of the wins coming against teams ranked in the top 25 of either the AP, USA Today or College Football Playoff polls. The Tigers are now 14-1 in true road games over the last two years with ten straight wins over a top 25 team.

In the big picture, this game showed a difference in the two programs in terms of coaching. Clemson’s coordinators put together comprehensive game plans that featured versatility on both sides of the ball. The Tigers were balanced on offense and showed the Gamecocks multiple looks on defense.South Carolina Review

In the big picture, this game showed a difference in talent, depth, and speed. Clemson was the by far the better team, and it showed in all three of the above areas. Clemson’s lines of scrimmage looked much more athletic and deeper than the arch-rival.

Kelly Bryant clearly outplayed Jake Bentley. Bryant was 23 of 34 for 272 yards with two touchdowns and one pick. Meanwhile, Bentley was 16 of 29 for 126 yards, but his two picks were vital. Ryan Carter’s pick-six was perhaps the game’s biggest play. It set the tone for the blowout.

One of the fond memories of this one will be Hunter Renfrow’s two touchdowns including the backbreaker on the first play of the second half when he took a screen pass 61-yards to give the Tigers a 27-0 lead.

It was also another big step for Tee Higgins who was coming off the best game of his career. In this one, Higgins caught three balls for 84 yards including a 40-yarder to set up a score.

The Tigers also won the special teams battle as Will Spiers backed the Gamecocks up deep in their own territory for most of the first half. One of the most telling stats is the fact that South Carolina didn’t cross the 50-yard line until the fourth quarter after Clemson took the 34-0 lead.

And this one was big for the Clemson fans. They are the ones that can walk into the office with bragging rights for another 365 days. They are ones that pull for the dominant program in this rivalry. They were ones that can talk of the four-game winning streak and the 69-42-4 record in the rivalry.

So yeah, this was a big one. Like 1989, 2003 and 2016, this one was a complete mismatch from the opening kick. When you beat your rival 90-17 over a two-year period, things couldn’t be much better, except for this...the best is yet to come. Clemson continues to widen the gap over South Carolina in recruiting, and there is no end in sight. That’s the big picture that tells an even better story.