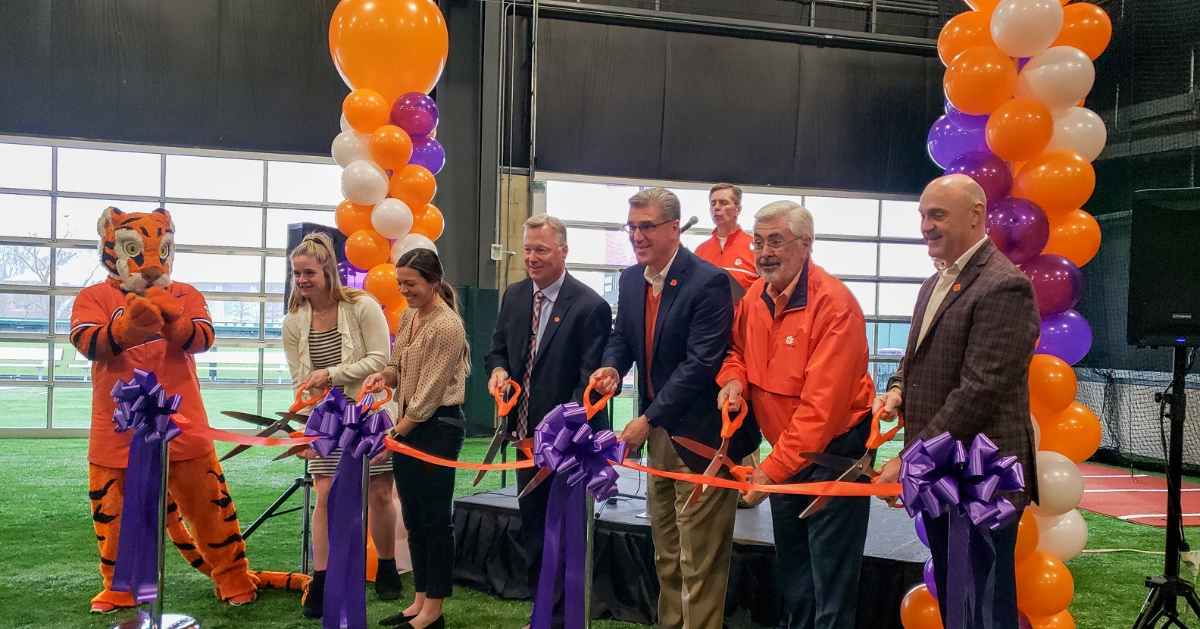 CLEMSON – It takes a lot of hard work and money to go from a pile of dirt and a handful of promises to a sparkling new softball stadium and the genesis of a new program, but all that came together Friday with the ribbon cutting at the new facility.

Pereira said the players enter the new facility each day with joy, a long way removed from the pile of dirt and promises.

“It is a true testament to the leadership that we have that they were able to convince 18 young women to commit to a pile of dirt and a handful of plans to build a softball program,” Pereira said. “But because of all of you, our coaches' promises have come to fruition and every day we walk into what used to be that pile of dirt overwhelmed with joy.”

Head coach John Rittman met the media with a smile on his face.

“This is certainly an exciting day for Clemson softball and our program. It's been a little over two years and it really has flown by,” head coach John Rittman said. “When we got here, we were wondering how we were going to stay busy for that long, but with the planning of the stadium, the construction, the recruiting, and putting the staff together we have stayed pretty busy.

“We were very fortunate to get some transfer students with experience and leadership. We have a great group of young players, so we feel very confident with the depth and versatility in our roster in this first year. The pitching staff is young this year, so there will be a few gray hairs. They are going to get thrown in the fire and we are very confident that they are all going to do well. They all complement each other very well and they compete and as a coach that is all you can ask for.”

Clemson opens its first-ever season as a program against St. John’s on Feb. 7 at 10 a.m. in Orlando, Florida. The Tigers will play a total of five games at the Knights’ tournament before hosting their home opener, a doubleheader against Western Carolina on Feb. 12. First pitch against the Catamounts is slated for 2:30 p.m.

“There was a lot of thought in where we should open up, and with the stadium construction and the schedule having to be made a year in advance we thought it might be best to open up on the road,” Rittman said. “Not that we didn't have faith in the facility, but you just never know. But especially with a young team, getting them on the road and getting the Clemson uniform on, and actually playing that first game for real I think will benefit us for our home opener on Feb. 12th.”

What can the fans expect? A lot of action and the best seats on campus.

“College fastpitch softball is fast-paced and you are right on top of the action. And as you can see in our stadium with the seating alignment, you are right there,” Rittman said. “You can hear all of the communication and you can really be an umpire. We have a saying that you would hate to be an umpire in fastpitch softball because all of the fans are right on top of you and they have a better view sometimes than you.

“It's a very addicting game and it's fast-paced and it's played at a high, high level. I definitely feel like this is a Top 10 facility in the country. It is a first-class facility. It has everything we need to be successful.”

The softball team will hold its inaugural Fan Day on Saturday at the new stadium. The afternoon of free activities will begin at 2 p.m., with gates opening at approximately 1:30 p.m. Fan Day will include an autograph session, a hitting demonstration with the team and Rittman, as well as tours of the facility. Posters, schedule cards and other promotional materials also will be available free for fans. Concession stands and the Tigers’ team shop will be open as well.