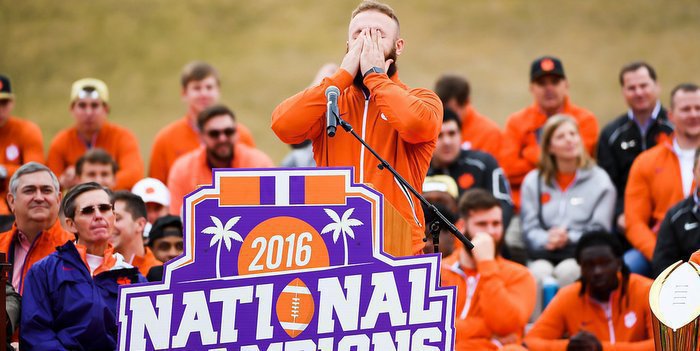 Boulware breaks down during his speech

Yes, Ben Boulware, you are indeed one of us.

Boulware, Clemson’s fiery and emotional leader, put on a final and memorable performance for the Clemson faithful Saturday afternoon in Death Valley, shedding his tough and gruff persona for the tender-hearted, orange-loving Clemson little kid who grew up in Anderson.

It pulled at the heart strings, and it was perfect.

The 2016 National Champions were honored with a parade and a ceremony Saturday, and nearly 70,000 fans showed up to see the trophy and pay one last tribute to the players and coaches that brought a championship back to Clemson.

But it was during Boulware’s speech that the tears started to flow, and they came from none other than Boulware himself.

“Mine might be a little longer than everybody else's just because I grew up in this area. I've been a part of this my whole life. I'm one of y'all,” Boulware said, his voice choked with emotion. “I think the best verse that epitomizes this team is 1 Corinthians 9:24 that says, In a race everyone runs but only one wins first prize, so run your race in a way to win. Our team did that all year from the start of our offseason workouts to the very last snap of Monday night's game, we ran.”

Boulware ran with the opportunity to be the leader of a team that needed a player’s voice following the Tigers’ loss to Alabama in the 2016 game in Arizona. Anyone who watched Clemson at practice, in pre-game or during a game knew that Boulware left everything he had on the playing field.

He then went on to thank the players and coaches that taught him how to lead and how to get the most out of his athletic abilities.

Whether it was his frantic special teams play his freshman year, his joy in the rain after the win over Notre Dame, his WWE moves on ball carriers or the pure joy that he showed following Clemson’s win over Alabama, Boulware showed he was more than just another player.

Truly passionate fans wish they could take one snap, play just one play and spend just a few moments wearing the paw in a real game. If they could, they would be Ben Boulware. He was an extension of all of us, and he will be missed.

“I'm so thankful for this university, and the opportunity that I've been given, the platform that I've been placed on and I'm just glad the trophy is back home. I love y'all,” he said.