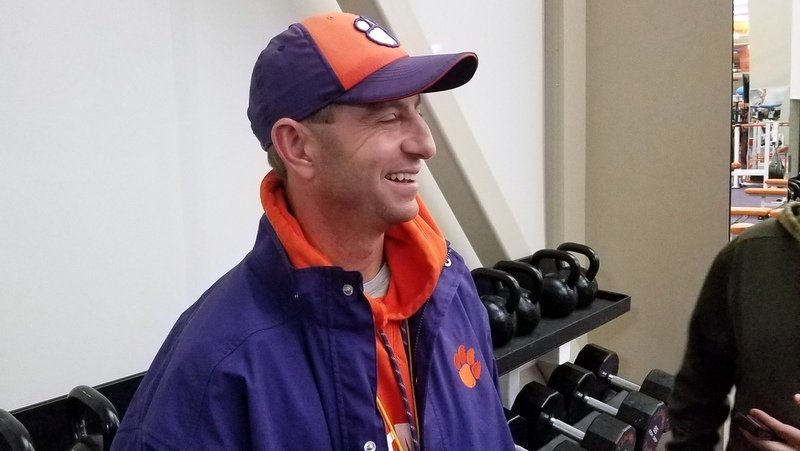 CLEMSON – Clemson head coach Dabo Swinney is celebrating his birthday and Thanksgiving in the same week, and as a result, he’s had to watch out for Clelin Ferrell and Christian Wilkins. However, it was (recruiting assistant) Bert West that got him.

The Tigers practiced for two hours Wednesday in preparation for Saturday’s rivalry game, and Swinney said the Tigers have had a great week of practice. There have also been times of celebration – and hijinks.

“We’ve had a great week. We’ve had a really great week. We had a great day today. Yesterday, when I came in the team meeting room they had a cake and candles and streamers and balloons,” Swinney said “It’s kinda like when you were back in school and you tried to distract the teacher for a little while because maybe it was her birthday, just something to try to kill some time. That’s kind of what that day was yesterday. I thought they were going to try to put my face in the cake because they had me blow the candles out.

“I didn’t trust Clelin (Ferrell) and Christian (Wilkins), so I kind of went around and when I blew them out Bert jumps out from behind the curtain and shoots off a confetti gun. It was fun and we had a good time. I’ve got to start checking that curtain because they’ve gotten me twice on that same curtain.”

“Whether he can play or not, he can be a captain. I know he can walk out there for a coin toss. He’s doing good. I think he’s going to be fine. He looks good. He’s practiced. He looked good out there today. He’ll be alright.”

“We’ve had a good week. Tonight was a really good spirit out there in practice. We’ve got a veteran team and they know how to get ready.”

'If you can (kick it deep), but the bottom line is we have to cover. We can’t put everything on B.T. It would be nice if he can kick it in the stands and there’s no return, but we’ve got to cover. We’ve got a bunch of good football players out there. If there’s a return, let’s go cover it and do a good job.

"He’s as good a player as we’ve played all year. He’s a great football player. He’s tough and he’s got really good ball skills. He’s not a big guy. He’s thick and put together and strong. He plays longer than he is. He does a good job of positioning his body and stuff. He breaks tackles. He’s a hard guy to tackle. He plays relentless. He plays the way you should be. You better know where he is and you better wrap up because he’s strong enough. To me, that’s what makes him who he is. He’s a fast guy but he’s not Tyreke Hill of the Chiefs. He’s fast but he’s so strong and powerful and breaks tackles and yards after contact and he plays in a relentless way. I think he’s an outstanding football player."