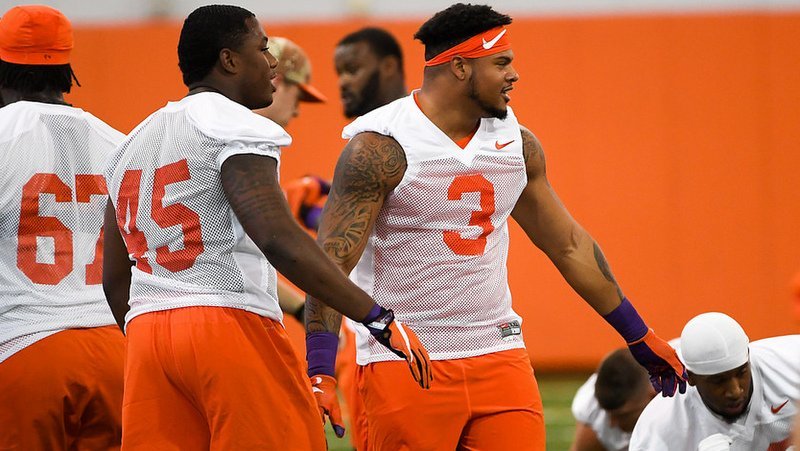 CLEMSON – Clelin Ferrell walked off the practice field Tuesday followed by freshmen KJ Henry and Xavier Thomas, the talented duo soaking in every bit of advice and information they can from the talented junior. Ferrell is happy to oblige because Thomas and Henry will each play a big role for the Tigers next season.

Ferrell smiled and said talented players stand ready to step into the gap.

"That's the motto — we too deep. There's never supposed to be a drop-off,” Ferrell said. “Whoever is in there, we feel like can go out there and perform. We have a lot of guys that people don't even know because all they see are the guys that are out there most of the time. But they're not worried about that, which is a good thing. Because then they're already defeated. They just put their head down and go to work."

Ferrell said players like Thomas and Henry fit the Clemson system, but said it’s on the players themselves to be great.

"That's the plan. I mean, hey that ain't for me to answer. That's for them. All we can do is pass down some things that we know and hopefully they buy into the system we have here,” Ferrell said. “But I feel like we are going to be great regardless because we recruit the right guys and I feel like we've led them into the direction and molded them through our system to be right kind of person, and they're self-motivated so they'll be fine."

Ferrell said Thomas has been impressive.

“I'm just surprised by how mentally strong he is, that's the great thing about him,” Ferrell said. “He was kind of wet behind the ears when he came in, didn't really know much but had a knack for getting to the quarterback."

Ferrell was asked about Huggins’ comment that Thomas had the best first step he’s ever seen, and Ferrell took a small exception to that comment.

“It's debatable. It's debatable,” he said. “Game film is what really matters. Practice is good, but games are what matter."

Ferrell said he has also been impressed with Justin Foster, who has had to learn a different position.

“That guy right there, it's been amazing to see his development,” Ferrell said. “Coming out of high school, he played linebacker. To see how well he's learned all the different schemes have been amazing. I knew as far as learning it wasn't going to be too much a hassle for him. Seeing him coming up and learning the techniques and playing the position has been good to see.

"He still has some things he wants to get better at, which is big because he hasn't stopped learning. It'll be great to see the finished product."

Ferrell saved the best for last. He was asked if he talks smack to the quarterbacks - specifically Trevor Lawrence - and he acknowledged that a little talking does go on. But he said it's all done in love.

"I wouldn't say it's hard. They take it as hard. I just say it's lovin'," Ferrell said. "It is more just caring about them. They do (love him back). They better. They can go anywhere else and play with guys who don't really care what their performance is. That is just the way it is; we want the best for each other. Whether we feel like getting the best out of somebody is getting on them real bad or maybe it's giving them love. That is just the way it is. When they say we are hard on them, we can do that because they know we care about the person first."