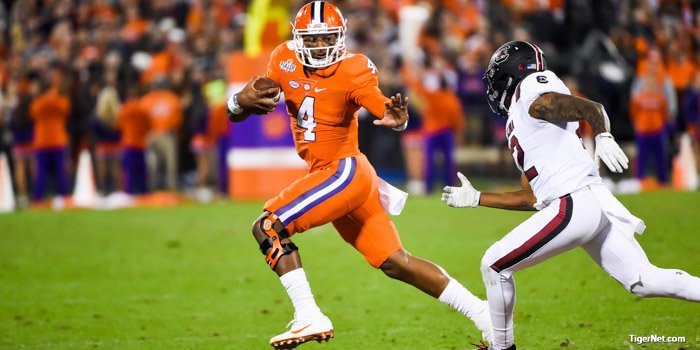 Watson is tied for seventh nationally with 34 touchdown passes.

Deshaun Watson made a promise to Clemson fans when he joined the program.

He made good on that promise Saturday with a masterful performance against South Carolina. The Tigers’ junior quarterback beat the Gamecocks for the third straight season with a six-touchdown, 347-yard game as Clemson rolled up a 56-7 win.

But Watson wasn’t the only standout as the defense came close to pitching a shutout, allowing just 218 total yards to finish the regular season in the top 10 in several categories: points allowed (17.0 per game, tied for eighth); total yards allowed (307.9 per game, eighth); sacks (42, third for third); tackles for loss (104.0, tied for second) and interceptions (tied for 10th).