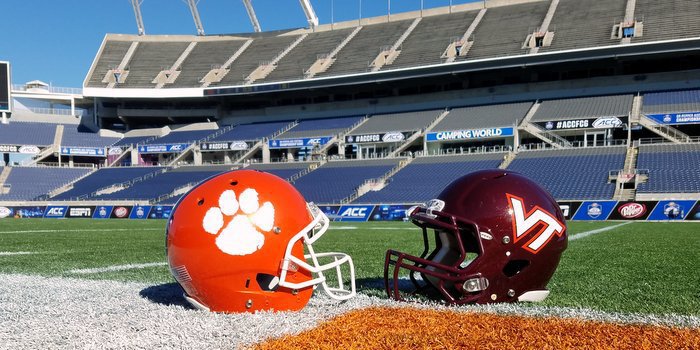 The Tigers and Hokies will kick off a little after 8 p.m. Saturday

What is the view like from the opposite side of the stadium?

TigerNet teamed up with The Key Play, a Virginia Tech website, to do a little Q&A session this week, and David Hood’s answer from the Clemson perspective were published on The Key Play earlier this week.

The Hokies and Tigers last played in the title game in 2011, but there are differences aplenty. Frank Beamer was the head coach of the Hokies, Chad Morris was the offensive coordinator at Clemson and Kevin Steele was the defensive coordinator of the Tigers.

The quarterbacks in that game? Tajh Boyd and Logan Thomas. This year’s matchup features plenty of talent across the board, and hopefully we can all learn a little more about the Hokies.

Here is the Q&A with The Key Play’s Joey Coogan. Hope you enjoy!!

DAVID HOOD: Frank Beamer is such a legend, and I know it had to be hard on Justin Fuente stepping into those shoes. How have the fans responded to the hire? Are they fully invested in what Fuente brings to the program?

JOEY COOGAN:Fuente endeared himself to the fan base almost immediately. For as much as the Tech faithful loved Frank Beamer, most understood it was time for fresh blood in the program. Fuente brought a tangible offensive identity to Blacksburg, something that had been missing for the better part of the past decade under both Bryan Stinespring and Scot Loeffler. But aside from a long-awaited culture shift offensively, Fuente really hasn't changed all that much with the program, and fans appreciate that. Longtime defensive coordinator Bud Foster still roams the sideline with free reign to operate his unit, and special teams, perhaps the enduring hallmark of the Beamer era, remain an emphasis. And if you've watched the Hokies at all this season, you know that each week Fuente awards the No. 25 jersey to the "Special Teams Player Of The Week," a touching tribute to Beamer's playing days -- Frank wore No. 25 as a cornerback at Tech -- that the team has rallied around all season.

The Tigers and Hokies will kick off a little after 8 p.m. Saturday "

DH: Offensively, how do you think the Hokies can exploit the Clemson defense? Do you see them running Evans as much as normal, or perhaps taking more shots down the field with Hodges and Ford?

JC: The Hokies need to establish some semblance of a running game to have a chance. They'll do their best with Sam Rogers and Travon McMillian at tailback, but I also expect to see a heavy dose of Jerod Evans on the ground. Evans won't wow you with breakaway speed, but at 6'4" and 230 pounds, he's just shifty enough to be dangerous running the football. If the Hokies can begin to have success on the ground, that'll open up play-action looks and one-on-one matchups for dynamic athletes like Hodges, Ford, and Cam Phillips.

DH: Bud Foster is another coaching icon, and he's been around Blacksburg for forever. However, when I've watched the Hokies play this season I see how he has adapted to the spread and changed his schemes (not dramatically but enough). What has he said about that. and how do you see him attacking Clemson's potent offense?

JC: Bud understands the spread is where college football is going, and he's embraced that. The obvious tactical shift for Foster over the last few years has been the transformation of his whip position (formerly a third linebacker in his system) into more of a nickel cornerback role that sophomore Mook Reynolds has starred in this season.

How will he attack Clemson's offense? I think he'll hope Fuente keeps them off the field. Kidding aside, it's clear that Bud has a ton of respect for the Tigers. Asked about Jeff Scott's unit this week, Foster remarked, "Probably the most complete offensive football team we've faced since I've been here." That speaks volumes, because Bud's been in Blacksburg for 30 years.

With that being said, Foster's made a darn good living scheming up brilliant defense. While he's known for his aggression and frequent man-free coverage, I'd expect him to keep a deep safety or two when possible in the hopes of limiting big plays through the air. That may open up the running game for Wayne Gallman and Deshaun Watson, but finally gifted with a serviceable offense on his team as well, I think Bud's content to keep the ball in front of him against Clemson. But when third down arrives, all bets are off.

DH: This is the same question you asked me.........Clemson hasn't played VT since 2012, and that's a shame that the two programs can't play more often. Heck, Clemson won't travel to Pitt for the first time until something like 2023. Would the Hokies like to see these two teams play more often?

JC: Absolutely. I can promise you there's not too many Virginia Tech fans who like playing Boston College -- the Hokies' cross-divison "rival" -- every single year. Sure, Clemson would instantly create a more challenging schedule, but it'd be a marquee game that fans, players, and recruits could all get excited about. If you ask me, the ACC's leaving money on the table sending two of their most accomplished programs to square off against Paul Johnson and Steve Addazio every year in cross-divisional games.

Evans is a baller, and people that know the game understand he's a difference maker. Do you think he has a chip on his shoulder, considering he shares a conference with Lamar Jackson, Deshaun Watson, Brad Kaaya, Mitch Trubisky, etc., and wants to show the world what he can do Saturday night?

He 100% has a chip on his shoulder. While no sane fan would argue Jackson and Watson weren't the ACC's top two quarterbacks, I would contend that Evans deserved third-team all-conference honors over North Carolina's Mitch Trubisky. After all, the Hokies did beat the Tar Heels by 31 points in Chapel Hill, but I digress.

With that being said, there's no need for Evans to be Superman on Saturday night. The Hokies have more than enough talent around him, so it'll be important for Evans to keep his emotions under control and just play consistently solid football.

DH: The Hokies haven't been in the title game since 2011....are the fans excited about this trip, and do you think moving the game to Orlando will hurt the way they travel?

Yeah, it's been far too long for most Hokies. After ten-win seasons became the norm in Blacksburg through much of the 2000's, the last four years were quite the shell shock for this fan base. But Fuente has gotten Tech back on the right track, and I think fans are strangely confident heading into the ACC Championship Game. There's just a "house money" feel to this one, as Clemson is more talented and certainly deserving of a ten-point spread. But despite what conventional wisdom may suggest, the Hokies are often at their best when little is expected of them, and that has fans feeling pretty excited heading into the weekend.

As for travel, the game moving to Orlando definitely hurts attendance. Charlotte likely would have sold out Bank of America Stadium with a Clemson vs. Virginia Tech matchup, but I don't think too many Hokies fans will make their way down to Central Florida.

DH: Finally, how do you see this game playing out, with your prediction.

JC: I'm expecting a great game. Both teams should have some success offensively, but it'll be turnovers and red zone stops that ultimately decide this one. I like Clemson to win late, 34-27.