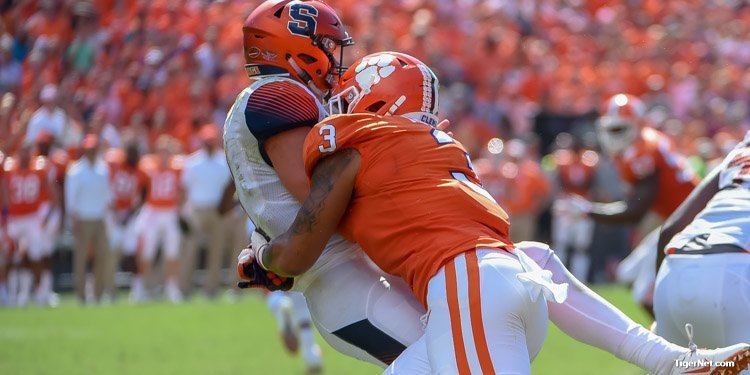 CLEMSON – Xavier Thomas lined up on the left side of the Clemson line, and one could imagine Thomas pawing at the dirt, a bull about to be unleashed. Thomas didn’t even get into a 3-point stance. He remained upright and as soon as the ball was snapped became a blur.

The beast was unleashed.

Thomas blew past Syracuse right tackle Koda Martin. Martin didn’t even have time to set his feet in pass protection. Martin tried to get a hand on the blur, but Thomas was past him so fast all Martin could do was watch helplessly while Thomas buried quarterback Eric Dungey, putting the rest of the country on notice.

The entire play lasted about two seconds. Welcome to the world of Clemson’s freshman defensive end, who is on track to earn more playing time as the season progresses. The Tigers played three option teams in the season’s first four games, but Thomas still made an impact, registering eight tackles in limited action.

Facing a fast-paced Syracuse attack, head coach Dabo Swinney remembered how Dungey hurt the Tigers with his running ability a year earlier and devised a plan to get three of Clemson’s best pass-rushers on the field at the same time. Regular defensive end Austin Bryant moved over to defensive tackle alongside Christian Wilkins. Clelin Ferrell manned the other side, and Thomas took his place on the left side of the line.

“Dealing with this quarterback, man, he hurt us," Swinney said. "And he hurt us the other day. We should've sacked him five times. We should've had five sacks. And he's just got eyes in the back of his head. We've got him dead to rights and, boom, he spins out and we miss him. Or he's going down and he gets rid of the ball. He's just a really crafty player. And there were times last year where he found the rush lane and we just couldn't go get him. 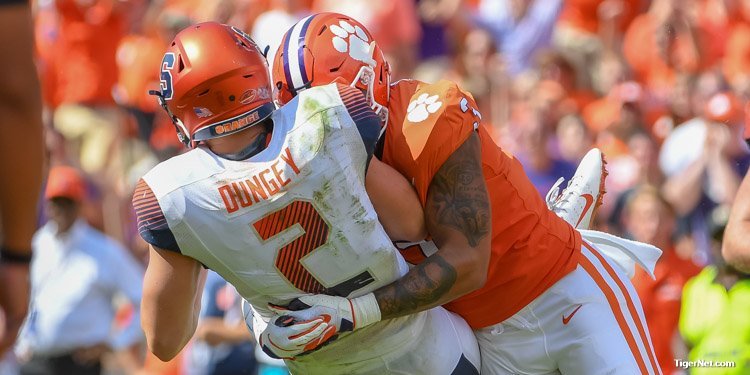 "I just felt like, in those certain situations, let's use Xavier. So that's what we did. We had a little Indy package and he was a spy guy. He was a rush guy. And he did a heck of a job for us. He's just taken off like a rocket ship. And I thought we probably did a poor job of rotating our guys last week. He played a lot, but he needs more reps. Because I thought Cle and Austin got a little tired."

Thomas was succinct in his description of the play.

"The tackle was getting slow out of his stance and I knew it was going to be a pass play," Thomas said. "I took advantage of it, the quarterback didn't see me and I just hit him. It gives you a confidence boost," Thomas said. "It's such a big game and it's such a big moment you get to go out there and play."

“He did a heck of a job for us. He’s just taken off like a rocket ship, and I thought we probably did a poor job of rotating our guys last week," Swinney said. "He played a lot but he needs more reps because I thought Clelin and Austin got a little tired. I felt like there was a couple plays where I saw a little bit of fatigue. That kid, he’s not a complete player, yet, by any stretch of the imagination but he plays full speed, his first step is special, he’s 260 pounds, he’s a good tackler.

"And he knows how to go get the quarterback."

“It’s a beautiful sight, isn’t it? You have four dogs in front of you,” Joseph said. “It makes your job easier, cause you’re like, ‘Oh yeah, they are about to go eat.’ It was good to see that work out.

“He’s a freak of nature. Super explosive. I just see a young Vic (Beasley). And no offense to Vic, but Vic wasn’t doing what Xavier is doing at his age. He’s super talented, and even when he goes on the field he’s not wide-eyed, he’s just ready to make a play. If he gets the ins-and-outs of his position, in due time he is going to be a great player.”

Joseph said he didn’t see the hit on the quarterback during live action but was amazed after watching it on video.