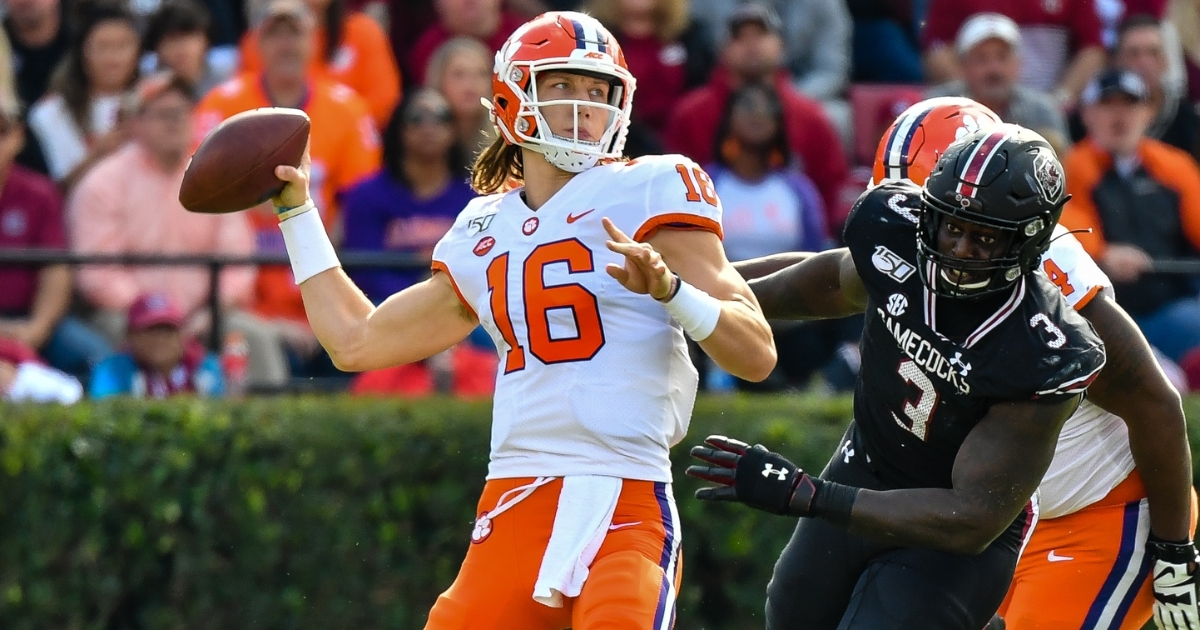 Lawrence warms up before Saturday's game at South Carolina.

Lawrence was the total package in Saturday’s 38-3 victory over South Carolina – he completed 26-of-36 passes for 295 yards with three touchdowns and no interceptions. He also rushed eight times for a career-high 66 yards and his 361 combined yards of total offense were the fourth-most of his career and his second-most of the season (437 at Syracuse).

“It feels good. This is our third goal of the year. We want to win the opener, win the division and to win the state championship is the third goal,” Lawrence said. “That is what we were saying after the game - you can win all of your games and lose to South Carolina and people will look at like it's a bad year. We just really were intentional about preparing for this week and not letting off at all. We had a really good week of prep and I think it showed.”

Lawrence has thrown a touchdown pass in 22 consecutive games. His current streak is the longest active streak in the country, and he threw three touchdowns to tie his single-season career-high in passing touchdowns (30), set as a freshman last year. He also set a school record for consecutive completions in a single game, completing 18 consecutive passes to break the mark held by Cullen Harper (15 vs. Central Michigan in 2007) and Kelly Bryant (15 vs. Miami in 2017). Lawrence’s 18 consecutive completions tied ACC single-game records held by Virginia's Michael Rocco (vs. Miami in 2012) and North Carolina's Mitch Trubisky (vs. James Madison in 2016).

Some of his biggest plays were made with his legs.

“There were only one or two runs where I kind of read it out and pulled it,” Lawrence said. “The other ones were just scrambles. They covered us up pretty good a couple of times, so I was just trying to make plays with my legs. It just happened, it wasn't really planned.”

In other words, watching Lawrence play quarterback right now is a lot of fun.

"There was a point when I walked over to him during the game and took my headset off and I just said, 'Man, it is so fun to watch you play quarterback," head coach Dabo Swinney said. "Because he made a couple of decisions — the big third down on the long (21-yard run), they played a four-man, which is basically like a two-man concept and that's a tough coverage, but the weakness is if you have a quarterback who can run the ball. But for him to process it and realize the situation and not try to force a ball and to take off and run ... that's what he can do."

And he’s only getting better.

“I think my confidence has always been there. I think it’s just learning and experiencing some things,” Lawrence said of his growth. “I know a lot more, and I think I’m a lot smarter of a football player. I think as far as confidence, I’ve always had the confidence to make throws and to play in big games. I’ve always had that. But I just think that I’m a lot better of a football player right now than I was a year ago.”

As Lawrence goes, so goes the Clemson offense, which is ranked third nationally in total offense at 541 yards per game.

“It’s just getting better every week. I say that every week but that is what we want to do, that has been our thing all year - we don't want to peak at the beginning of the year,” Lawrence said. “We want to get better and better and I think we've done that and takes a lot of attention to detail and paying attention in practice.”