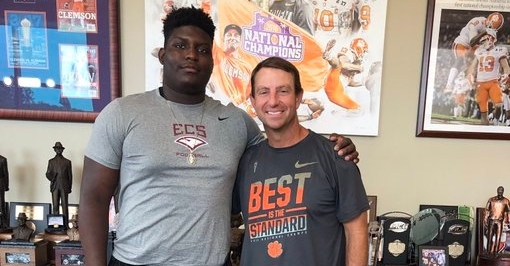 One of Clemson’s top remaining targets along the offensive line for the 2021 recruiting cycle has the Tigers in his top five.

Clemson offensive line coach Robbie Caldwell is working a small number of highly-rated prospects for his final spots in the 2021 class. The Tigers have a pair of offensive linemen already in the class, one a center and one a tackle.

Caldwell could add a couple of more to the list at guard and tackle. One who fits both spots is Dietrick Pennington (6-5 326) of Memphis (TN) Evangelical Christian. He plays tackle but in the 247Sports Composite, he’s rated as a four-star guard, No. 12 in the country and No. 4 in Tennessee.

Pennington recently trimmed his list to a final five of Clemson, LSU, Florida State, Auburn and Georgia. He camped last summer in front of Caldwell and Dabo Swinney and picked up his offer from them last June. He was back for a game in September and for a junior day in January.

Those experiences, and his conversations with Caldwell, have him feeling good about the Tigers.

“From my recent visits to Clemson and talking to the coaching staff, I can see myself growing spiritually and as a man there,” Pennington said. “I’m being recruited as a tackle. We haven’t talked about it much, but in general he (Caldwell) likes my aggression and footwork. He also likes the way that I could bend, that I was a natural athlete, and the way that I could catch on to different things quickly.”

Pennington has his focus on five now and he doesn’t plan to make a decision until after his season. That gives him more time to do his homework.

“Planning on getting down to the schools I haven’t been to first, get as much information I can and from there I’ll narrow it down,” Pennington said.

Some of the other offers Pennington considered were from USC, Mississippi State, Memphis, Tennessee and Arkansas.