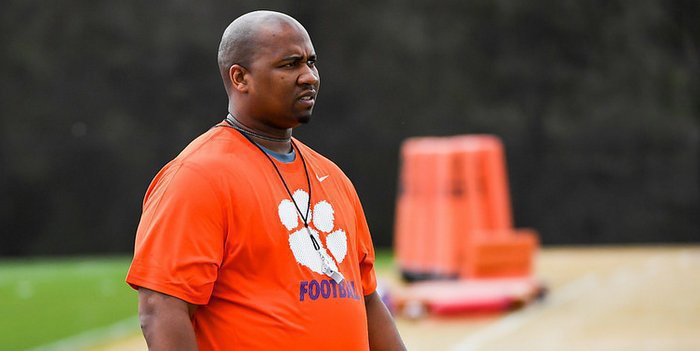 Bates works with the players at Wednesday's practice

CLEMSON - New defensive line coach Todd Bates was in his element Wednesday afternoon, moving from player to player on Clemson’s back practice field, teaching and working with players on the game he loves.

He called each player by their first name, at times providing a gentle nudge in the right direction, other times using a sterner approach when he wanted to get a particular point across. But he did it all with the slight smile of a man who is truly happy, and he told reporters before the practice began that working for head coach Dabo Swinney is a dream come true.

It’s a dream realized that he wants to take full advantage of.

“Man, it feels great. It's a great family atmosphere. The players work hard and really love football, but they also want to get a degree,” Bates said in the Reeves Football Complex team room. “You can tell that they are committed to that. I tell you what, I've always pulled for Coach Swinney and I've always been a big fan of his ever since I got into coaching into 2007 at Talladega High School.

“I heard him speak at one of my teammate's funeral, that I played with at Alabama, and I thought, man that guy is special. I hope I get a chance to work for him one day. Well, here's my one day and I plan to do something with it. It's a great opportunity. I've prayed about that and once you get granted favor, you have to be able to walk in it. It's a dream situation, joining a team that is defending National Champions.” 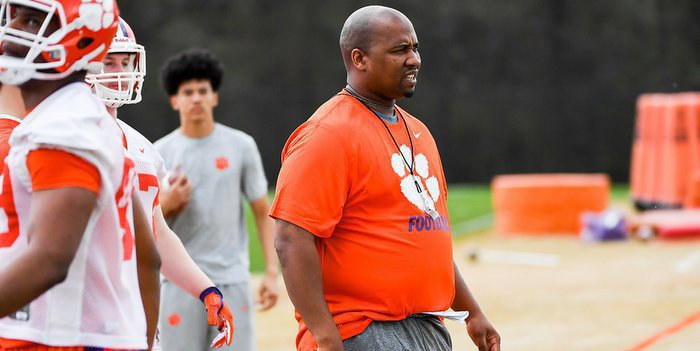 Bates works with the players at Wednesday's practice "

"I just want to fit my piece of the puzzle, roll my sleeves up and go to work. It was very dream-like. I believe in what Coach Swinney believes in - grow where you are planted and be where your feet are. That's all I was doing is trying to be the best wherever God blessed me to be,” Bates said. “I got the call, and it was very dream-like. I'm very fortunate, and I just plan to do the best I can with the blessing.”

He then said he thinks he will fit in with defensive coordinator Brent Venables’ scheme.

“It's very similar - attack and react and gap sound defense - to what I've been a part of. My co-defensive coordinator at Jacksonville State (Brandon Hall) had worked with Brent for a good while (as a defensive assistandt with Venables at Oklahoma), so a lot of the verbiage is the same,” Bates said. “That's helped me a little bit. It's nothing like being in it and diving in full speed, being in knee deep, well actually, I'm in neck deep now. But, I can't wait to just get out there on the field because that's where it's always the same for me. I feel comfortable out there and getting my teaching in order and familiar with the scheme.”

Clemson returns veterans like Christian Wilkins, Clelin Ferrell, Austin Bryant, Dexter Lawrence, Albert Huggins and Richard Yeargin to a defensive line that should be one of the nation’s best in 2017, and Bates said he realizes the gift he’s been given.

“It's a great situation to be in. It's not broke, nothing here is broken. You're just trying to get better every day. Best is the standard, and you want guys to improve their best, and that's all I'm trying to do is get out there and get to work,” Bates said. “I've got guys that want to get better. They're hungry for knowledge, and they've all accepted me, and I plan on giving them my everything. It's great. It's a great opportunity. Those guys are very talented up front and have a lot of experience. They are battle-tested, and I just plan on putting them in the stress of the job and get them to be sharper. Iron sharpens iron, and I hope I can be that.”