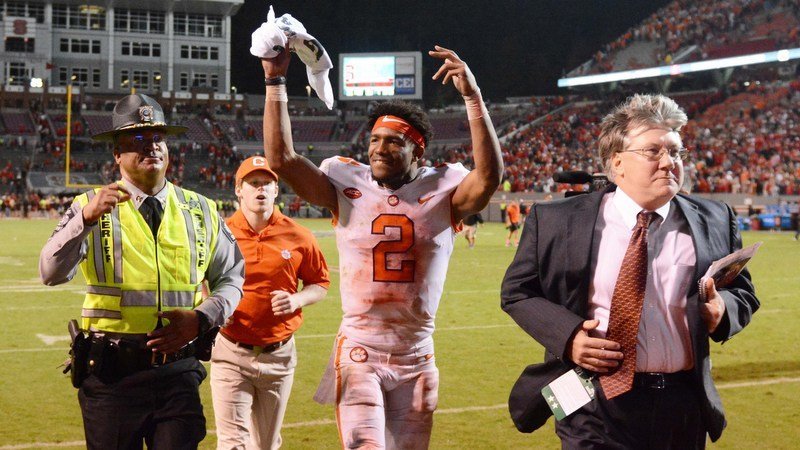 Bourret is out front at NC State last season, the same place he's always been during his storied career (Photo by Rob Kinnan, USAT)

I don’t have a say in the matter, but Clemson’s Tim Bourret belongs in the Ring of Honor alongside other Tiger greats.

The longtime Clemson Football Communications Director announced Friday that he will retire from the position on July 1, 2018. Bourret began his Clemson career as an assistant sports information director under Bob Bradley on September 1, 1978.

A native of West Hartford, Conn, and a graduate of his beloved Notre Dame, Bourret was inducted into the CoSIDA Hall of Fame last summer. Under his direction, the Clemson Sports Information Department has been honored with a “Super Eleven” Award by the Football Writers Association of America four times in the last eight years.

Since the announcement, platitudes have rolled in praising his accomplishments, his work ethic, and his encyclopedic mind, and each one shows the amount of respect he has garnered over the years. Everybody from writers to big-time broadcasters to coaches to former players had something to say about Bourret and his time in the business, but they don’t even begin to tell the story. As I told Nikki Friday evening, Tim is the man who isn’t a myth but is a legend.

The first time I met Tim, I was what was called a “cub reporter” at the Greenville News, and the date was September 19, 1987. I worked on the agate pages and answered the phones, and I was in the office early that Saturday when another legend, News columnist Dan Foster, threw me a press credential and asked if I wanted to see Clemson play Georgia in Death Valley.

Bourret is out front at NC State last season, the same place he's always been during his storied career (Photo by Rob Kinnan, USAT)"

Of course I did, and on the way to the Memorial Stadium press box, Foster filled me in on the personalities I would meet and gave me instructions on how to act. He introduced me to yet another legend, former SID Bob Bradley, and a few minutes in (eyes wide with excitement), I was introduced to Tim Bourret.

I was scared to death. This was heady stuff for a kid just out of high school, and while most of the people I met that day dismissed me out of hand, Tim made me feel welcome, and I found a seat by the fourth legend of the day, former coach Frank Howard.

On the way back to Greenville, however, I told Foster that I was most impressed with Bourret, mostly because he treated a young, aspiring writer as an adult and a professional. It was a lesson I’ve carried with me my entire career – treat everybody the same and treat everybody with respect. I doubt Tim remembers that day, despite his prolific memory, but that one afternoon shaped the writer I was to become.

I covered Clemson off and on over the years and our paths would cross, but it wasn’t until TigerNet hired me full-time in 2008 that I really got to know Tim. And, to be honest, I thought he hated me. After a certain amount of time, I confided to a veteran writer that I just couldn’t quite crack the code that was Tim Bourret, and he laughed and told me to be patient. His message was simple – respect is earned, not given.

I put my head down and attended every practice and every press conference and every game and worked as hard as I could. One day, just as a football interview started and the media gathered around former quarterback Tajh Boyd, Bourret started the interview session by nodding at me and saying, “David, ask the first question.”

I was beyond thrilled. That simple nod, to me, meant I had arrived. It was a sign of respect from someone that I respected more than anybody in the business, whether it’s a writer or a coach or player or broadcaster. That has been repeated countless times over the past several years (it also means I’m getting old), and I’ve tried to live up to Tim’s expectations of me.

This past summer, Nikki and I made the trip to Notre Dame and we called Tim en route. He gave us several recommendations of what to do and what to see, and when we walked into the Notre Dame bookstore, there were several books Tim has written out front. A salesperson came to ask if we needed help, and I pointed to the book Tim wrote with former Notre Dame coach Digger Phelps and said, “Tim is a friend of mine.” The salesperson smiled and said, “Tim is a legend around here. If he’s really your friend, you’re lucky.”

I do consider Tim a friend, and yes, I am darn lucky. I also know that when he leaves, Clemson will never be the same. He will continue to live in the area, will be involved with the athletic department in a part-time capacity in terms of writing and broadcast assignments, and other special projects. But I am also sure that he will spend more time in South Bend, and I cant blame him.

The only favor I will ask of him is this: Notre Dame has a tradition called Trumpets in the Dome, and when Clemson plays there in 2020 I want to witness with Tim as my guide. Another big football game where I am made to feel special by Tim will make it feel like I’ve come full circle.

And when they put him in the Ring of Honor, I want a front row seat, and I have to thank him for the front row seat he’s given many of us to hundreds of Clemson sporting events over the years.