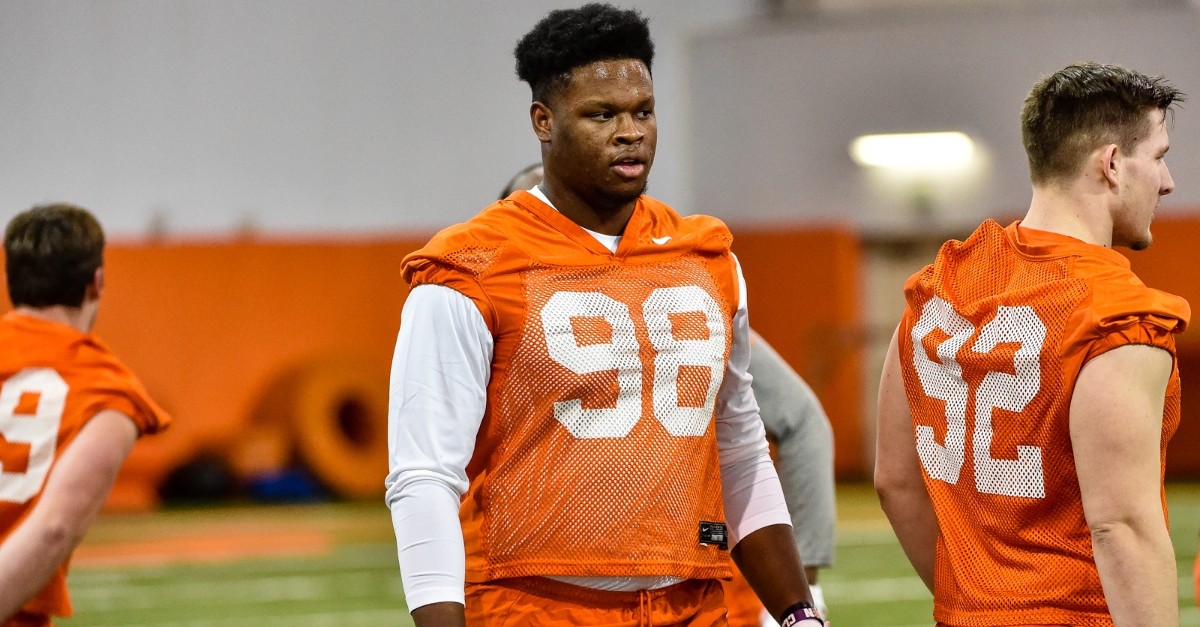 Myles Murphy will likely play early and often this season.

KJ Henry didn’t hesitate when he was asked about the freshmen defensive linemen on the Clemson roster: They are all ballers.

Defensive tackles Bryan Bresee, Tre Williams, and Demonte Capehart and defensive end Myles Murphy have all drawn rave reviews during fall practice, and no one has been more impressed than Henry, the redshirt sophomore out of North Carolina.

“I see why this is our first number one recruiting class, if I am not mistaken,” Henry said after Monday’s practice. “These boys are some ballers. From side to side, these boys can play. They are strong and physical. Three years ago, I would be so jealous. Y’all would not see me up here because these boys would be taking my spot. So, I am glad I have some years on them because they are some ball players and are physically ready. The mental side has grown since they have all got here.”

Murphy weighed in at 272 pounds before the start of fall camp, 21 pounds heavier than Henry checked in at in 2018.

“Myles was nothing like me when I came in,” Henry said. “He could not have been a good basketball player because he is too big. That dude is a freak of nature to say the least. One day, I want to be a football coach. But I am sitting over here as a teammate and I am like, ‘Dang! Where did we find this kid?’ He is awesome. He is so smart. He is a great kid. He is going to be special this year. He is strong and long and explosive. He just wants to get better every day. I can only say good things about him. I am excited for his opportunity. Getting to meet his family and stuff makes it more personal, so he is going to be great for us this season.”

Starting left guard Matt Bockhorst doesn’t have to block Murphy, but he’s seen what the freshman can do.

“Obviously a defensive end, so I don’t go against him directly as much,” Bockhorst said. “But really physical, just a ball player, and he’s another guy that I think is going to make an awesome impact this year for us.”

Bresee checked in at 300 pounds and can play either end or tackle, and Henry said Bresee was a man among boys in Maryland.

“Him and all of those guys are crazy. Y’all seen it high school. We talk about it all the time,” Henry said. “I hate to knock the competition, but he has to come to North Carolina because we can give him some competition because that was crazy up there. We felt like we were going to have to call the cops or something because that had to be abuse. But he is transferring and doing some of those same things on this level. Bryan is an animal to say the least and will be another great player for us.”

Bockhorst said Bresee is unlike anything he’s ever seen.

“I guess the two things would be explosiveness and get-off,” Bockhorst said of Bresee. “I think that it’s not like anything I’ve seen, and that’s including Christian Wilkins. I mean, he’s a great athlete, just unbelievably gifted, and true freshmen always have little details in their technique and things like that they can work on. But that kid’s going to be an impact player, for sure, and he’s certainly living up to his billing. He’s a great guy, hard worker. I’ve got a lot of respect for him, so I’m glad he’s on our team.

“He’s an unbelievable athlete, crazy explosive, and he’s going to be a game changer,” Bockhorst added. “He’s still young, still raw, got things to work on, but the tools that he came into Clemson with as a true freshman are pretty incredible.”