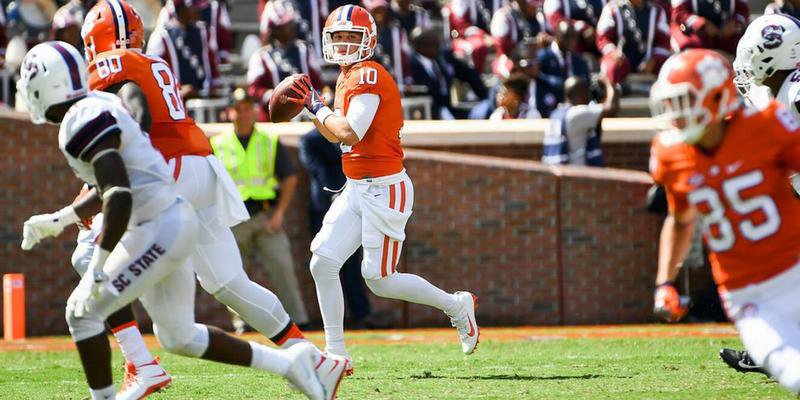 PHOENIX, AZ- With just a few more days until the showdown between the Tigers and Buckeyes, the team took some time after Wednesday’s practice to meet kids from the Special Olympics of Arizona. One Tiger, in particular, had a very rewarding encounter with one of the deaf children.

During the National Anthem, Clemson Quarterback, Tucker Israel witnessed a mom in the crowd signing to one of the Special Olympics athletes that just so happened to be standing right in front of him. Without hesitation, Israel, who has taken American Sign Language (ASL) since high school, introduced himself to the young boy….in sign language.

“Since taking ASL and being around the deaf community, I already had a different perspective,” Israel told TigerNet Thursday morning. “I know that they can feel excluded at times and when I saw this Mom signing to her son, I wanted to see if I could help and that's why I reached out to him.”

And what a coincidence that the only deaf athlete there that day and the only Tiger that can sign are later placed into the same activity group. Each Special Olympic athlete was placed with members of the team and participated in different games such as corn hole, soccer, play station video games, and even football.

Having no clue that he would be using his signing skills, especially during a College Football Playoff Semifinal week, Israel was thankful to have the opportunity to meet this special boy.

“It was a really rewarding experience for me because I finally had the opportunity to use sign language in a sports setting,” Israel said. “It was especially rewarding for me when the parents came up teary eyed afterwards and were thankful that someone could communicate with him in a way that is ‘normal’ for him. I don’t think it was a coincidence that we were placed in the same activity group. Things happen for a reason and if we weren’t paired up, then he really wouldn't have had anyone else there to talk with. I’m thankful I got to meet this boy and his family and make a new friend.”

American Sign Language is a complex language that uses signs made with the hands and other movements, including facial expressions and postures of the body. ASL is the predominant language used by an estimated 500,000 members of the Deaf Community in the United States and Canada. This means, ASL is the third most used language in the United States.

“Back in high school when I had to choose a language requirement, I didn’t realize how useful and rewarding that choice would become for me,” Israel said. “At the time, I was doing anything I could to avoid taking Spanish! I have learned so much about people and about myself from learning these skills.”

Although Israel is not a World Languages major, he continues to strengthen his signing skills by taking American Sign Language classes at Clemson. Clemson University – along with schools such as Harvard and Yale, is the only four-year public institution in South Carolina that recognizes and offers ASL as a world language credit. At Clemson University, you can earn a Bachelor of Arts degree in World Languages with a concentration in ASL.

“Through my experiences working with the deaf community, I know the sound-of-silence goes way beyond just not being able to hear,” he said. “It trickles all the way down to sometimes being looked at a little differently and often being excluded from groups and conversations making one feel completely alone. Sometimes we take for granted that we can hear or talk. Opportunities such as today always put things in perspective. I’m just glad that I could help out a young athlete and make a difference. Today was a blessing for me.”

Although sign language is something Israel will continue to pursue, he doesn’t necessarily think that everyone needs to learn it to make a difference. Rather, knowing how to treat people should be a priority.

“I don't think everyone needs to learn sign language to make a difference. Today, was a reminder for us all to use our gifts and talents to help others,” he said, “What we should have in common is the passion to treat others with respect and compassion, especially those with disabilities. After all, the only real disability in life is a bad attitude.”

The Special Olympics Arizona's (SOAZ) goal is to empower the over 180,000 Arizonans with intellectual disabilities to be healthy, productive, and respected members of society through SOAZ's year-round sports training, competitions and support programs. This was his first time working with the athletes of the Special Olympics, and he plans to continue working with them for years to come.

Q: What were y'all doing with the Special Olympics kids of Arizona?

“We were in groups helping them with different games like corn hole, football, play station booth, soccer. “

“I have not helped out before. There was actually an athlete signing the National Anthem, and I saw this lady in the crowd signing to her child, and it just so happened to be one of the athletes standing right in front of me. Later on, he ended up being in my group.”

“I took sign in High School and continued to take it in college.”

Q. What made you want to learn?

“I didn't want to take Spanish class and I thought it would be interesting to learn. I am so glad I ended up taking it.”

Q. What was the hardest thing about learning to sign?

“Definelty maintaining eye contact and trying to understand what they're telling you. Their finger spelling is tough too.”

Q. Did you expect to have an encounter signing yesterday?

Q. How rewarding was it to be able to communicate with this boy on a personal level using sign language?

Q: From meeting this boy and his family, has it changed your perspective on life in any way?

“When taking asl and being around deaf people and knowing what they go through, I already had a different perspective being around them before I know they can feel excluded and when I saw his mom signing I wanted to see if I could help in any way and that's why I reached out to him. “

Q: Is Sign something you think everyone should learn?

“I don't think everyone needs to learn sign language, but I think they should learn how to treat people and see them just as normal people. After all, the only real disability in life is a bad attitude.”

Q: Is ASL something you will continue to pursue and learn?

“I have another semester, so yes I will continue to pursue it.”