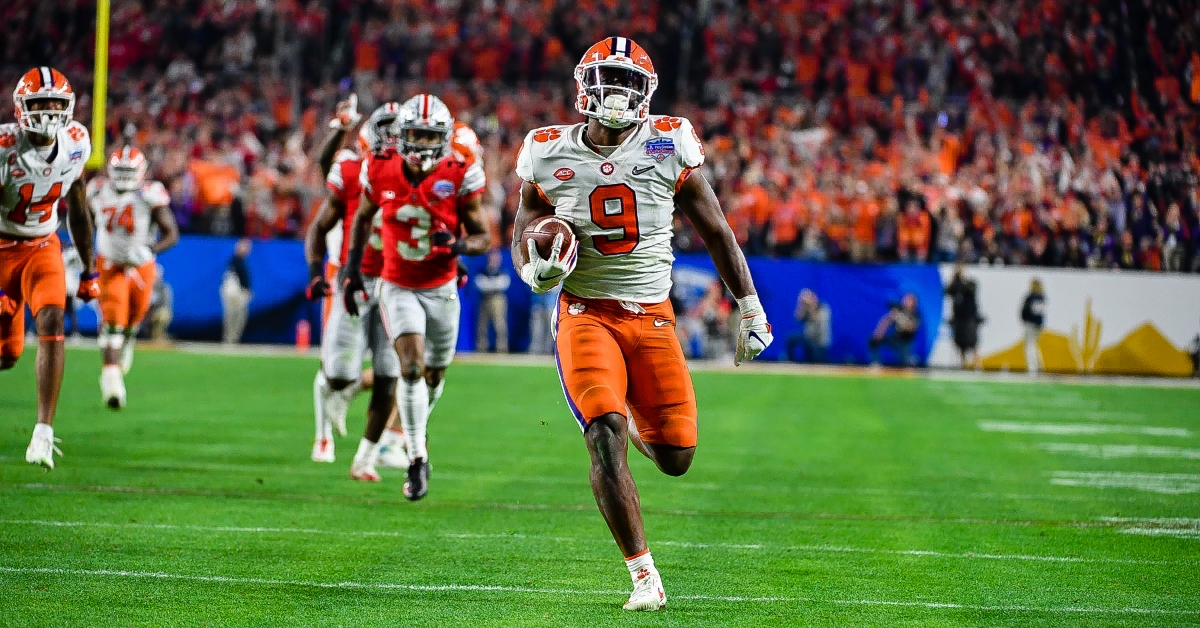 Etienne scores a touchdown against Ohio State in the Fiesta Bowl.

Seeing Travis Etienne break runs and score touchdowns for Clemson instead of LSU makes Ed Orgeron sick to his stomach.

Clemson and LSU will face off in the National Championship Game on Jan. 13th in the Superdome in New Orleans, and Etienne, the standout junior running back, should play a pivotal role.

Etienne grew up in Jennings, Louisiana, a 90-mile drive from Baton Rouge and wanted an LSU offer above all others. Orgeron was an interim coach when Etienne was finalizing his recruitment and Clemson swooped in and snatched a great back out of LSU’s back yard.

That doesn’t sit well with Orgeron, who thinks about how things might have been different.

“All the time. Hey, I wonder how it is. I know how it happened, and every time I watch -- every time I heard about Clemson play or every time I've seen him having success, I'm sick to my stomach,” Orgeron said. “Obviously, we like our running backs. We've got great running backs here, but we wanted Travis Etienne at the end, but it was too little, too late.”

Orgeron said the LSU knew all about Etienne but didn’t offer quick enough.

“I was an assistant here. Travis kept on coming up, kept on coming up,” Orgeron said. “But one reason or another, we never offered him a scholarship, and then after I became interim coach, we had a couple of players that we had been recruiting for a while. We thought we were going to get them, and we thought, if we offered someone else, we may lose them. Then we got shut out. I offered Travis really late at interim. I had a home visit with him, told him how much we wanted him, but it was too little, too late. He had made up his mind already.

“Something that I think we should have done a better job of, we should have recruited him at an earlier age, like we do all our great Louisiana backs, and keep them in state. He's the one that got away.”

LSU will also have to contend with Clemson quarterback Trevor Lawrence.

“He's a winner, 25-0 and hasn't been beat yet. That tells you a lot about him,” Orgeron said. “Just watched the film, watched several games this morning, three or four games the last couple of days. The way he takes command, the way he takes charge, obviously, the RPOs, his reads are right on it, has a strong arm. But his ability to run, he surprised me.

“I haven't played against Clemson, haven't studied them, but his ability to tuck the ball and leaves his arms up front, he is an outstanding runner, makes some big-time plays in big-time ball games and for a big chunk of yards. Obviously, he made some big gains against Ohio State, which helped them win the game.”

What does he see out of Clemson?

“Athletes, speed, scheme. Their receivers are big and tall and athletic, fantastic,” he said. “Etienne is one of the best backs we'll see all year. Louisiana product, outstanding young man. I tried to recruit him at the end, very fast. Again, he made two explosive plays to help against Ohio State. He's a prolific rusher, one of the best rushers in Clemson history, scores a bunch of touchdowns, very fast.

“I think the thing, when you look at Clemson's offense, you think about athletes and speed in space. When you look at defense, you think about Brent Venables, the great job he's done, his ability to adjust against the different offenses he's seen. I think he's an excellent coach. I've always known Brent for a long time and respected him as one of the best defensive coordinators in all of football. Their defensive line is quick and strong, can rush the passer, his blitzes are phenomenal. So I think it's a great matchup. When you get to the championship game, you're going to play against a team with some great coaches. You've got a team with some great players, and that's what we have.”