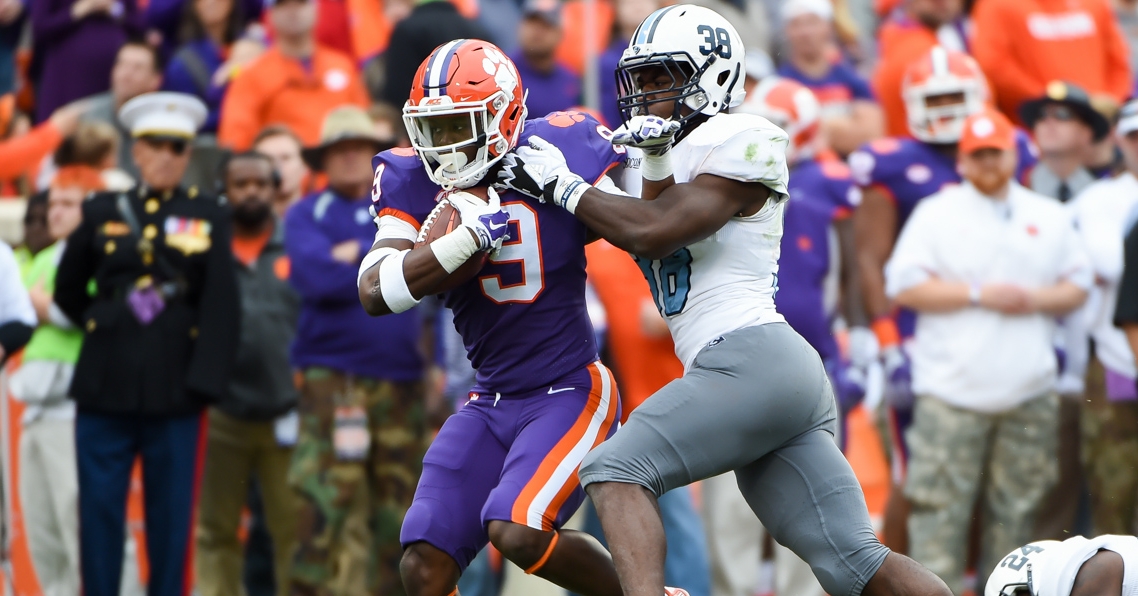 Travis Etienne carries a Bulldog defender in the 2017 game.

The Citadel head coach Brent Thompson is looking for his Bulldog team to make it a game for as long as they can Saturday at No. 1 Clemson (4 p.m./ACC Network). Playing the nation’s top-ranked team isn’t something new for the FCS program.

“Usually in a game like that, your No. 1 concern is the environment, and will it be too big for your players,” Thompson told the media earlier this week. “And in that game, I never got the sense that the environment was too big for us.”

Clemson defeated the Bulldogs 61-3 in 2017. Kelly Bryant was 17-of-22 for 230 yards and three touchdowns and was out of the game before halftime. Fifteen different players caught a pass and nine Tigers carried the ball at least once.

This Clemson team is one that head coach Dabo Swinney says is his most talented roster, including quarterback Trevor Lawrence, running back Travis Etienne, and a wealth of talent on both sides of the ball. The Tigers overwhelmed Wake Forest 37-13 last weekend in the opener, opening up an early lead and playing 78 of the 80 players that traveled.

“Clemson is as advertised,” Thompson said. “And we are going to do our best to compete on their level for as long as we possibly can. We’ll do everything we can to make it a game for them. The last time we played at Clemson, I thought we were a little bit in awe. We have a lot of guys from that area, and you get out there and watch them run down the hill. It took us a little while to settle into the game.”

The Bulldogs were able to possess the football and put together time-eating drives in the first half at Alabama in an effort to lessen the Crimson Tide’s scoring opportunities.

“A lot of things went our way in the first half,” Thompson said. “And the No. 1 thing was, we approached it as a team as to how we were going to shrink the game and try to make them kick the ball. Our defense did a good job of getting some early stops against a very powerful team. On offense, we were able to play keep-away as much as we could. We played extremely hard and we had guys who stepped up all over the place. If we can do that, we can hang in there for as long as we possibly can.”