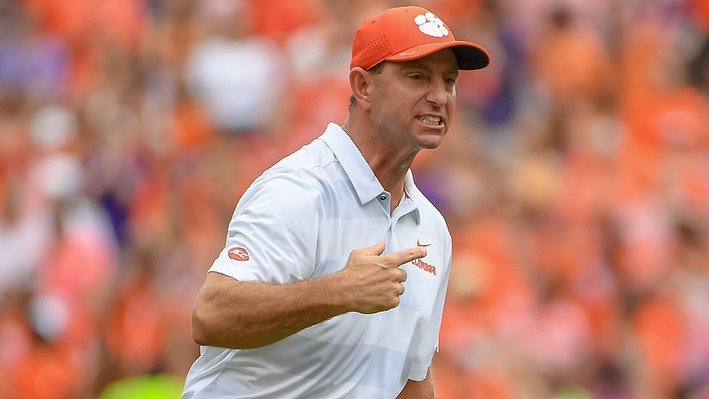 Former head coach Tommy Bowden resigned on Monday, Oct. 12th, and Swinney was given an interim tag that Tuesday and told to finish out the rest of the 2008 season.

Swinney was 4-2 that season and capped the regular season with a 31-14 win against South Carolina. Swinney said that victory – in his first game against Steve Spurrier – likely was responsible for Phillips taking the “interim” off Swinney’s title.

“That win was big – it kept me at Clemson,” Swinney said. “If we hadn’t won that, I have no idea where I’d be. I probably wouldn’t have gotten the job. It made it hard for them not to give me an opportunity.”

This week – thru Saturday – we will take a look at Swinney’s best moments in his decade as the head coach. We will start with his interim press conference that Tuesday night.

Swinney sat down at the podium that day, dressed in a purple polo with orange and white trim, beside Sports Information Director Tim Bourret. Swinney was nervous as he began his opening statement.

“I am going to apologize to you ahead of time. This is going to be a pretty raw press conference, probably from some you guys have had,” Swinney said. “I obviously haven't prepared anything for this. This is a very bittersweet day for me. I've dreamed of being a head coach, but I never dreamed of getting a job this way. Tommy Bowden was my first coach at Alabama and gave me an opportunity here. He has been a great friend and mentor. I love him. He is a good man and has done great for Clemson University. This is the bad side of this business so from an emotional standpoint this is a very bittersweet day for me.”

Swinney warned everyone he would go full speed.

“From a professional standpoint, this is a great opportunity and I am going to take it and run with it and do the very best that I can,” Swinney said. “I have worked my whole life to have an opportunity to lead a team. I am not perfect and I am going to make some mistakes, but I can promise you they will be made full speed. There is one gear and that is wide open and that is the way I expect the team to play.”

Swinney said he had nothing to lose.

“I certainly didn’t see it coming...But that’s how things happen in life. Things happen quickly,” Swinney said. “That’s why you always have to prepare. I’m going to do everything I can to make Clemson proud. One of the things I talked about to the team and talked about to the coaches - and I’ve got a little saying on my desk that I’ve had for years and years and years - there is nothing less important than the score at halftime. And that’s where we are. We’re at halftime. It really doesn’t matter about the (previous) six games. It’s what we do going forward.

“Whether we were 6-0 or 0-6 or you’re up 12 points at half or down 12. It really doesn’t matter. What matters is what we do going forward and I’ll do everything I can to do the very best I can. One thing I don’t want to do is look back in December and say, ‘I wish I had done this. I wish I had done that.’ You’re looking at a coach with nothing to lose. We’re going to lay it all on the line. Might be a seven-week career, but it’s going to be fun.”

He finished by giving a look into the future, saying his tenure at Clemson would be all about the players.