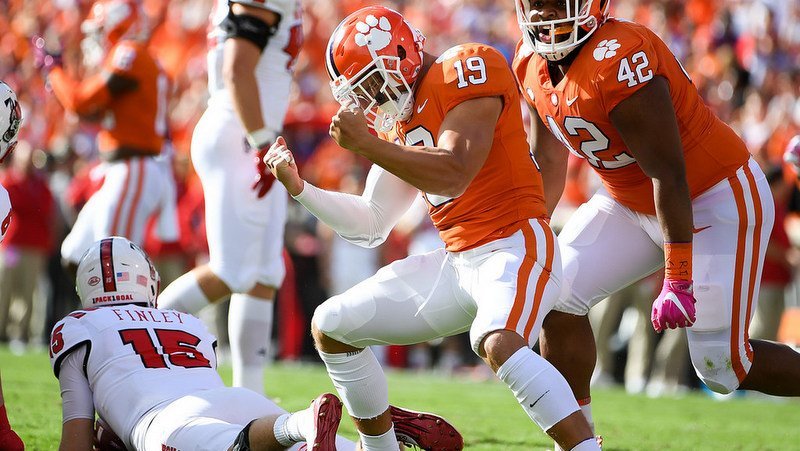 Tanner Muse hopes to play against his brother in November

CHARLOTTE, NC – Clemson safety Tanner Muse is happy that his brother Nick gets to experience college football at the highest level but tried to steer him to any school but South Carolina.

Nick Muse announced last month that he’ll transfer to South Carolina. Muse transfers to the Gamecocks following a two-year career at William & Mary. In two seasons, Muse recorded 34 catches for 508 yards and two TDs. Of the 508 receiving yards, 453 of those came in 2018.

The career-year led to a lot of interest from bigger programs, and Tanner did his best to send Nick anywhere but Columbia.

“He really blew up during that two-week span,” Tanner told TigerNet at the ACC Kickoff Wednesday. “I was telling him he should take visits to here and here and he was like, ‘Yeah, I think I’m going to South Carolina.’ I was like, ‘Okay, whatever. If you enjoy it, do what you want to do.’ I tried to get him to go up north, deep south but he really loved it there and said the coaches were good. I was just like whatever man, I love you either way.”

Muse said he will be looking for his brother when the teams meet in November, even though it isn’t known if Nick will have to sit out this season.

If they do play against each other, no one will be happier than Tanner.

“That’s every brother’s dream to be able to play each other on this level and on this stage,” Muse said. “You see a bunch of brothers through the NFL and that would be awesome. He’s a great player and I’d love to play against him. Dad is on his side and mom is on my side, so I told him and dad, ‘Look, if we get that opportunity, I’m going to give you all I’ve got so you better bring it because I’m going to bring it.’