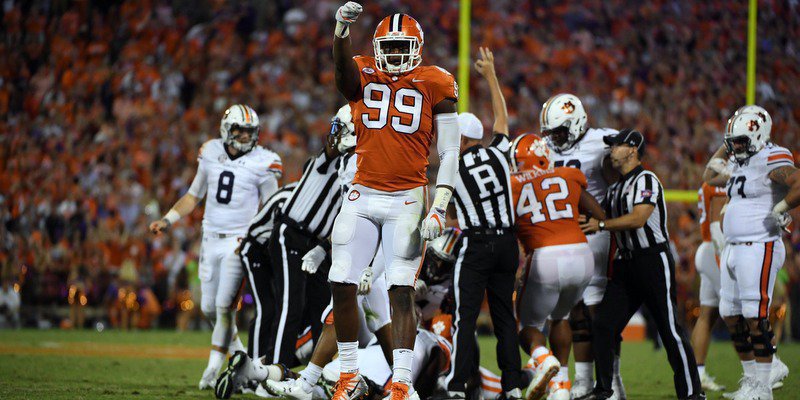 CLEMSON – Clemson head coach Dabo Swinney and his second-ranked Tigers spent Saturday night celebrating a 14-6 victory over Auburn, but on Sunday turned the page to next weekend’s primetime matchup at Louisville.

Clemson faces Louisville at 8 p.m. next Saturday night at Papa John’s Stadium, and Swinney spent a few minutes Sunday evening looking back at the win over Auburn and looking ahead to Louisville.

“Just coming out of meetings here. I had an opportunity to sit down with the staff and review everything and pull everything together. A lot of fun watching the tape,” Swinney said during his weekly Sunday teleconference. “It was a heck of a ballgame, hard-fought by both teams. Just really proud of our guys for the effort, the toughness to finish. It was a gritty game and one that we can grow our team from early in the season. We’re getting ready for conference play and to get that type of experience and to be battle-tested like that early is something that I think will pay off for us as we get ready for this next challenge of having to go on the road.”

“Defensively just tremendous and dominant in all three levels. It starts with the unbelievable effort and just consistency as far as how we performed on the backend, the linebackers, and then up front,” Swinney said. “We tackled well. Their ability to not be able to effectively run the ball was critical.

“Offensively we have a lot we can improve on, but the toughness to finish. The play of Kelly Bryant, the big plays from Deon Cain, Ray Ray McCloud and Hunter Renfrow were all positives. The biggest disappointment was the two fumbles, obviously. Field position, momentum. We had a couple of sacks. We really missed a couple of opportunities that we need to take advantage of, but all in all a lot of positives from a hard-fought game. It’s something we can improve from. 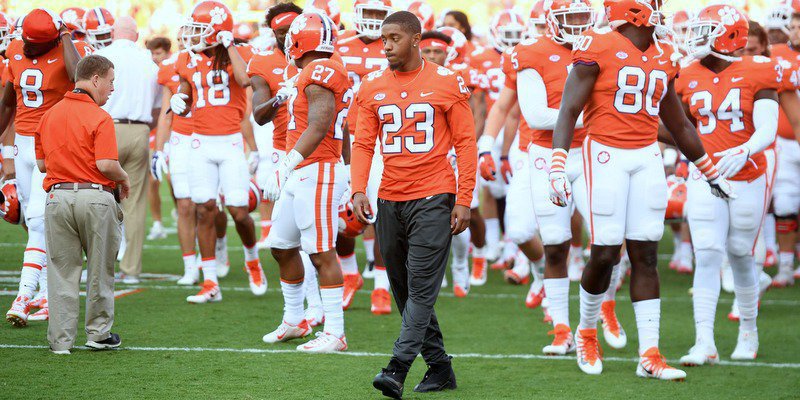 “I’m pleased with special teams. We did miss a kick and that could’ve been a critical moment for us to have made that kick, but other than that we were very solid in our special teams. I’m just proud of the team getting to 2-0. Now we’re trying to get ready for division play and it’s another tough challenge this week going up to Louisville and GameDay and all of that stuff. They changed the time, so it should be a great experience and we’re going to need a great week of practice.”

“Health-wise, we’re in good shape. Marcus Edmond was the main one with his foot. We’ll know more on him tomorrow and we’ll see where he’s at. X-rays were good.”

“Players of the game were Austin Bryant defensively, Hunter Renfrow and Kelly Bryant offensively and Will Spiers on special teams.”

“We didn’t play well, that’s for sure. That was a disappointment last night. We did not play well at right tackle. We are much better with how we played. Now, give them some credit because they are really good, but we’ve played better and we practice against good players every day. We just did not play to the standard. We did do some good things but when you make a couple of mistakes, that’s what stand outs to everybody. People don’t see the good stuff that happened and there was really good things. It definitely was not a bright spot for us last night.”

The play of K’Von Wallace at safety

“He played well. We did have a few alignment issues and there are some things he can do better - formation recognition and staying in coverage because he’s very aggressive but just really proud of him. He played with confidence, poise, great effort It’s not an easy offense to defend. There’s a lot going on with that offense from formations and movements and shifts and unbalanced and ineligible guys. There are a lot of moving parts and I thought he did an outstanding job. Our whole secondary, that’s as well as I’ve seen our secondary play. A very clean game the entire night.”

The latest on Van Smith 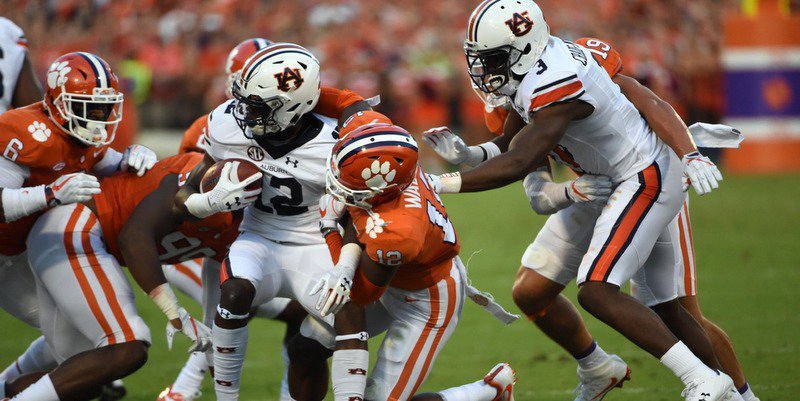 K'Von Wallace was solid against Auburn

“I’m not deep enough into the tape just yet, but I did get to see a good bit of his game yesterday. He’s just very confident and poised. You can tell that he’s very sure of himself and their offense. That part jumped out just from watching him yesterday. It’s why he won the Heisman. A lot of people still believe he’s the best player in the country because it’s hard to have answers. You do a great coverage and you’ve got him stopped on paper, but most of the time he’s better than your guy that’s trying to tackle him. Once he gets out into space he’s got the speed to break it. He’s a huge challenge and will be for everybody he plays, but we look forward to competing against him. We know what we’re in for. He’s going to make his plays and we’ve got to make a few more than they do.”

Where are you right now with the running back position?

“That was a critical fumble. There’s not enough separation between our backs. We have to take care of the ball. We’re the same place that we’ve been. We have three guys that we trust as starter-type guys and then a young guy who is getting better every day and is going to have his opportunity as we keep moving forward.”

Could we see Tavien Feaster get more touches this coming week?

“We only had 60-something snaps yesterday and that’s not the norm for us. We never really got into a rhythm with our offense. Six plays in the first quarter and 11 minutes in the whole first half and 66 plays. It’s been a long time since we’ve had that few plays. We’re an offense that wants to snap it 85 times, so we didn’t get anywhere near the rhythm, the flow, the balance, the amount of touches for all of our guys we’d like to get. Sometimes the game dictates different things and styles of play and how you play. Again, hopefully, we can do a better job in some areas and all of those guys will get plenty of opportunities to showcase what they can do.”

How did Justin Falcinelli grade?

“He did a good job. We had one issue when he snapped the ball and we were really lucky with the throw on the move to Renfrow because the ball shouldn’t have been snapped. I’m glad Kelly was ready. He played well. He really did. We were pretty solid outside of right tackle. We didn’t put our best foot forward there. I haven’t lost any confidence in Tremayne Anchrum or Sean Pollard. They’re just true sophomores, but they’ve both played big boy football here for a while now. They didn’t have their best game yesterday but I know they will respond. Falcinelli did a really good job for us in there.”