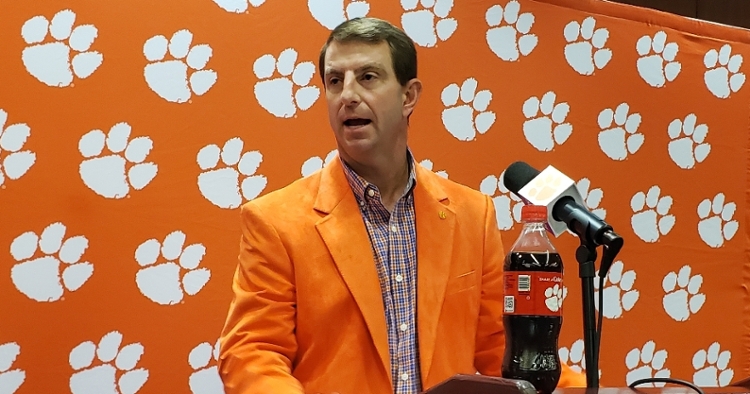 Swinney talks to the media Wednesday in the WestZone.

CLEMSON – Head coach Dabo Swinney searched for the right word to say when describing his 2020 recruiting class before finding the right one.

“It’s amazing, especially for me, because I have been here 17 years,” Swinney said Wednesday from the WestZone in Clemson. “It is pretty cool to see how our brand has grown and then also to see how this age group has grown up in this decade of Clemson football. So, it is a pretty cool experience from my side of it as well.”

“I don’t know how it will all shake out, but maybe, this might be our first No. 1 class,” Swinney said. “We have never had a No. 1 class and that is not a goal of mine. I will not lose any sleep over that because when we sign a guy, we think he is a five-star. He might be rated a two-star or a one-star like Adam Humphries, or a two-star like Grady Jarrett or a three-star like Travis Etienne. But when we sign one, we believe he is a five-star because he fits the criteria that we are looking for and brings certain things to the table that we think make us better and fits our program.

“So, maybe we get our first ever No. 1 class. I don’t know, but I think if we do it is a credit to the young men and just shows, first of all, how our brand has grown. But also, it just so happens that the best players in the country this year were great fits for Clemson and we were great fits for them. That is really what that says more than anything.”

Per Rivals’ rankings, Clemson signed the top two players in the nation (No. 1 Bryan Bresee and No. 2 D.J. Uiagalelei). It marks the first time in Rivals ratings (since 2002) that one program has signed the nation’s top two recruits in a single class. Also, the 2020 signing class is Clemson’s 10th top 15 recruiting class in a row.