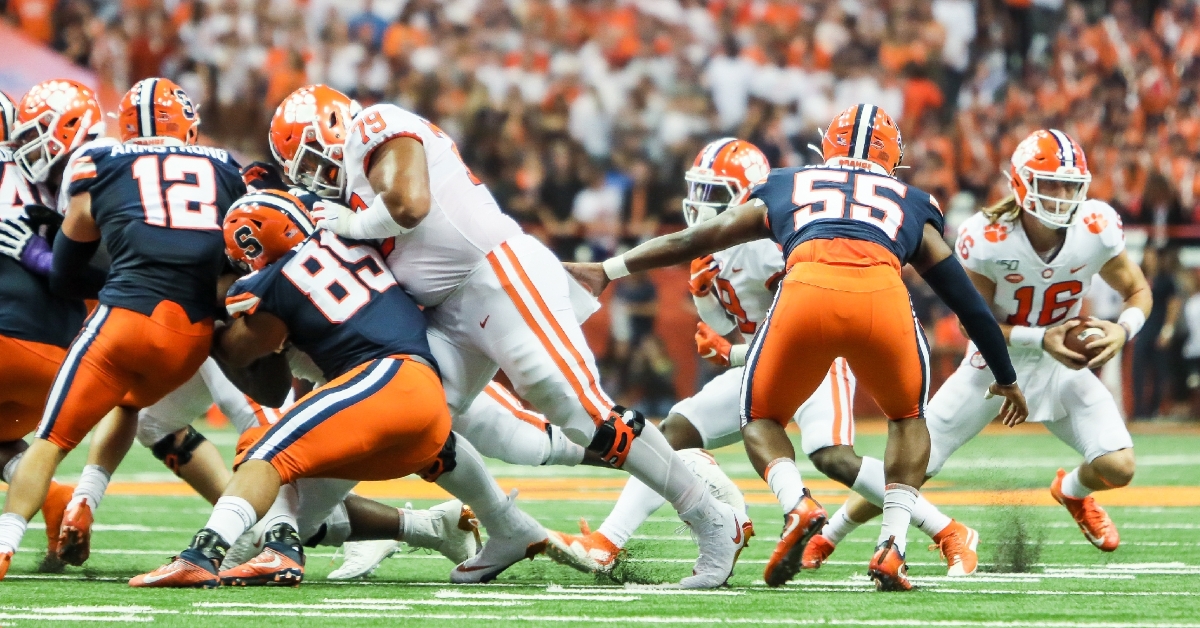 CLEMSON – Clemson’s offensive line has been outstanding through the season’s first three games according to head coach Dabo Swinney.

The top-ranked Tigers are 3-0 and are one of the few teams in the country averaging over 250 yards per game through the air and on the ground. The Tigers are averaging 39 points per game, a whopping 544 yards of total offense, 251 yards rushing and 293.3 yards through the air.

Credit goes to the offensive line.

"Outstanding. Super, super proud of them. They've been physical. Bodies have been all over the ground,” Swinney said during his Tuesday press conference. “Not a lot of busts. They've done a great job of communicating. Really proud of Sean Pollard. This guy is playing center for the first time and has done a heck of a job. Their energy, their effort ... just outstanding. They've protected our quarterback. Jackson Carman has been awesome. If he keeps progressing, he can be a special player. John Simpson is an all-conference, All-American kind of guy. Cervenka and Anchrum are doing so well. It's a close group and our second guys are doing well."

"Yeah, we have (been physical). I just think their physicality - these guys like it,” he said. “They love the challenge and love to prepare, too. This group is in here watching tape all the time. They're very serious about playing well. They take so much pride in their performance. (Tremayne) Anchrum is one of the best leaders we have ever had here. Same with all four of those veterans. It's a lot of fun to watch Jackson (Carman). He's a special talent. He's chasing guys all the way downfield. He has become a good player and not just a good talent. He has worked his butt off. He has gotten serious about it."

Carman is a sophomore and a former 5-star who is taking the game seriously.

"It's amazing how far he's come in a year. You watch him out in space, and he can run,” Swinney said. “That's why he one of the top guys coming out in high school. Now he has some functional strength, mentally he's in a good spot, and he's got good people around him. He's playing fast, free, and confident, and that leads to physicality."