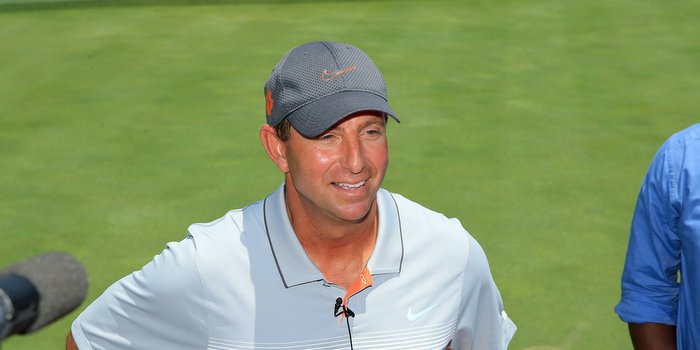 SUNSET, SC – Expectations are high for Dabo Swinney’s football team in 2016, but Clemson’s head coach says nothing has changed – the Tigers have been the hunted for the past five seasons.

"I’ve had those questions a couple of times, but I don’t see it that way, I think we’ve been the hunted for a while,” Swinney said on the putting green. “I mean, we’ve won 56 games in five years. I don’t know if we’ve been the underdog very often in the past four years or so. Probably 90 % of the time over the last four years we’ve been the favorite. I think that our guys understand how to handle success and what you have to do to be prepared each and every week to play whatever the opponent is.

“The best part of our program is just trying to focus on ourselves, trying to perform to a standard. You hear me say that all the time but it's the truth and i think that is why we have to become incredibly consistent. I think the expectations have always been high. I don’t remember a year that it hasn’t been. We don’t have anyone on our roster who's won less than 10 games. So out of everyone on our roster, other than the freshman who just got here, they know what it takes and have an appreciation for what we do and how we do it. And there’s a lot of buy-in amongst these guys.”

On having Mike Williams back 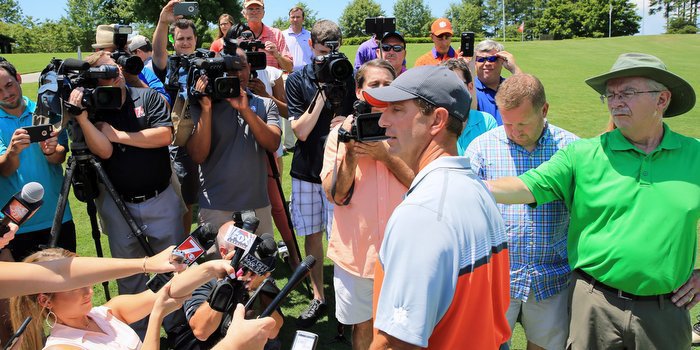 “It's really nice. Mike is a game changer. I think he changes everything from a defensive standpoint in how you're going to try to defend us. We're in a much better spot offensively than we were at this time last year, that's for sure. We played four freshmen at wide out last year - Hunter Renfrow, Trevion Thompson, Ray-Ray McCloud and Deon Cain - and then we lost Mike in the first quarter of the first game. At tight end, I think we're going to be much better there this year. That's a storyline that will be fun to track because I think the backups at that position are ready to become factors for us. Same thing at running back. Having Mike back brings a problem. It's another one of those things that defenses are going to have to deal with because he's a hard guy to handle.”

“Everybody is in good shape. Adrian Baker is going to miss camp. He's still going through his rehab process and doing well and progressing well. He'll be out. Cannon Smith is coming off of a shoulder surgery, but I think he's going to be cleared and ready to go by the second. He'll probably be limited and in green for a few days, but at some point in camp they'll be cutting him loose, so he'll be able to get some work in. Other than that, we should be ok from a veteran standpoint. A lot of people will probably ask about Feaster because they know he had some shoulder surgery, but he's been cleared to get back out there as well. He'll be out there. T.J. Chase, we're still waiting on. He's not a medical issue but hasn't cleared all of his hurdles academically yet. Hopefully we'll get some good news on him this week, but if not he's going to go to prep school for the fall and rejoin us in January. Noah Green is cleared and looked great.”

Having a great program

“My message has always been the same. I've never wanted to just have a great team. I want to have a great program and to have a great program you have to be consistent for a long period of time. I think that's what we've been able to do, and that's why we're relevant, but ultimately we want to win multiple national championships. We want to win multiple ACC Championships. We just want to be a team that's consistent in everything that we do. If we can be that consistent top 10 or top 15 type of program year in and year out, then we're always going to have a chance. I think this is a year like last year that we're one of those teams that has a shot. A lot has to happen, but we've got a chance. I think we've got a good roster. We're young - we've got 10 seniors and 12 juniors, but they're some grown men that have great experience to draw upon to provide great leadership for our young guys. That sophomore class might be as good as we've ever had. A lot of guys - there's 27 of them and 22 of them have gotten a lot of good experience to draw upon. We have a very dynamic freshman group that's going to come in here and help us. It's a good roster, and I think we can be another good team this year, but I'm much more interested in the type of program that we sustain around here.”

Providing motivation for the upcoming season

“I don't have to say anything. I think the failure from that game is all the motivation they need. It's part of the journey. Pain is a good thing. If we won every game all of the time, you'd never appreciate it. We won as many as Alabama did last year, we just lost the wrong one. We won more games than anybody in the history of college football, so I think that's a great experience for our team to draw upon, but I don't really have to say anything. I think their experience has brought the sense of urgency that we needed. From day one, the chemistry of this team has been unique. It's been special. I think that experience of the grind of last year has prepared them well for their opportunity this year. All it is is opportunity and potential. We've got to go pay the price. We've got to climb back up the mountain with a great humble and hungry attitude.”

*Taylor Lawson and Cole Little contributed to this report.