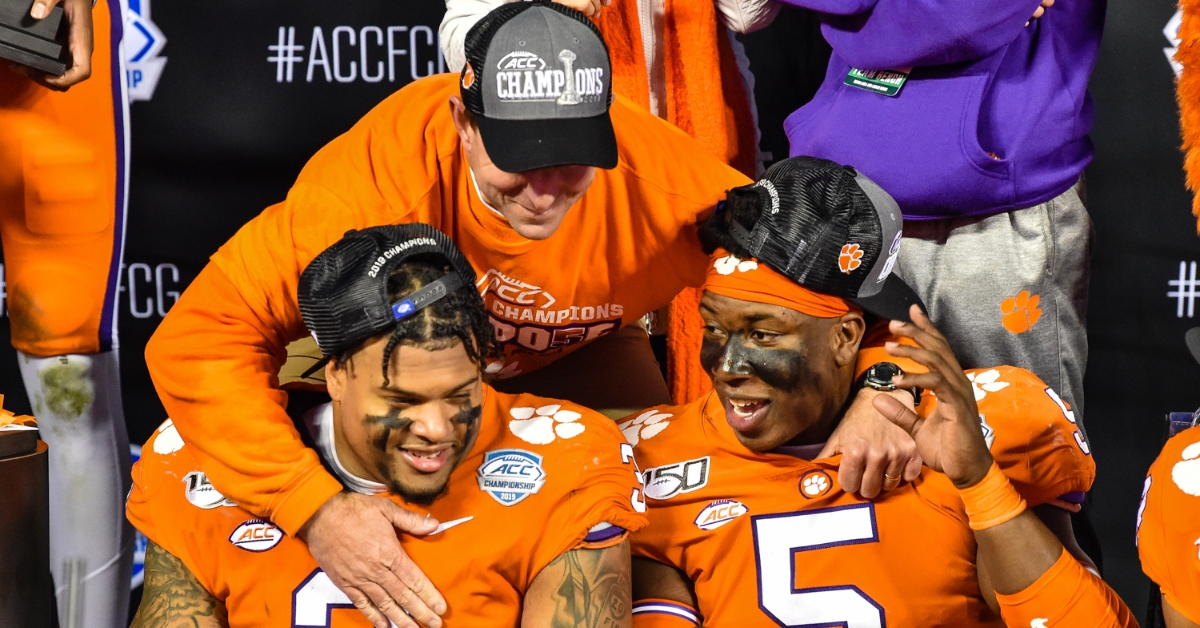 Swinney said his team is unified.

CLEMSON – Clemson head coach Dabo Swinney went on the record late Monday afternoon about events that have swirled over the program over the last week, and he says he would fire any coach that called a player a racial slur.

In a video released by the athletic department, Swinney said he understands the hurt that has occurred over the last week in our country.

“There have been a lot of words spoken this week, some helpful -- some hurtful, and I want to take a second to address some of that,” Swinney said. “This is a historic time in our world and in our country and as a coach, and as a team, we will do our part to create positive change against racism of any kind social injustice and police brutality. I always have believed that actions are a lot louder than words andvI love our team for the actions that they have already taken, with a great town-hall meeting with lots of communication. And in our position meetings, we had a wonderful senior meeting last week with just great discussion and it’s just awesome to see and hear our young men speak and have that wonderful brotherly love.

“We've got a team meeting coming up and many other things, so I'm proud of the actions that our guys have already taken. We're just a football program and I'm just a football coach but Clemson has been a leader on and off the field for the past decade and we will continue to be a leader and a light for many. We are a unified football team and we will work to unify others about how we serve by how we play the game and by how we do our jobs as a staff.”

Assistant coach Danny Pearman was called out by a former player on Twitter for using a racial slur during a practice in 2017, and Swinney said he would not tolerate a coach calling a player the n-word.

“I would say, anybody who has been in our program, they know that there are two words I don't want to hear. There's two in particular that I will absolutely call you out on, and one is the n-word and the other one is GD,” Swinney said. “I would just fire a coach immediately if he called a player an n-word, no questions asked. That did not happen. It absolutely did not happen and it has not happened. A story broke this week and the story was not in context.

“It was a coach and a player – Coach (Danny) Pearman and DJ (Greenlee) off doing a drill on another part of the field. It wasn’t in front of the whole team. And Coach Pearman was correcting DJ and trying to get him to do the right thing. And either DJ was talking to another player or another player was talking to DJ, and DJ said something he probably shouldn’t have said. He said, ‘I blocked the wrong f’in n-word.’ And Coach Pearman said it to him and he’s mad, and in correcting him he repeated the phrase. He said, ‘We don’t say we blocked the wrong f’in n-word.’ And he repeated it. And he shouldn’t have done that.

“There's no excuse for even saying that. It doesn't matter what the context is, but there is a big difference. He did not call someone an n-word and so again, I didn't know anything about it. Things happen. There's a lot of things I don't allow in our program, but when things happen, sometimes it’s private and sometimes it’s public. In this case, the player came to me in private and we handled it in private.”

Swinney said he brought in longtime friend Woody McCorvey (Assistant AD of Football Administration) to help with the situation, and once Pearman apologized the matter was put to rest and the team moved on and that nothing was swept under the rug.

*In regards to the Haamid Williams tweet – where Williams said Swinney said the n-word over music being played – Swinney said that was an outright fabrication. He says he was embarrassed by the music playing when they were showing then prospective-coach Mike Reed around and the allegation that he said the N-word is "absolutely false."

Says former Clemson tight end Brandon Ford called him and said it was crazy and an absolute lie.

*Swinney says he wholeheartedly supports Black Lives Matter. Says that phrase doesn't even go far enough. He wasn't trying to mock anything with the "Football Matters" shirt he was pictured in over the weekend. He said anyone saying that he was mocking the “Black Lives Matter” movement with the shirt is attacking his character.

“I had a t-shirt on that someone took a picture of me, that asked to take a picture, and it's a shirt I've had for a couple of years,” Swinney said. “It's given to pretty much every coach by the National Football Foundation. That's been and I think it goes all the way back to 2014. Any insinuation that I was trying to mock the Black Lives Matter movement, it is just an attack on my character. That’s really sad. I also will say I wholeheartedly support black lives matter, and in fact, I don't quite think that's adequate enough.”

*In regards to the Sikes Hall sit-in, he said he merely told his players to make sure they knew the message that was being conveyed before they participated but never told anyone they couldn’t or shouldn’t participate.