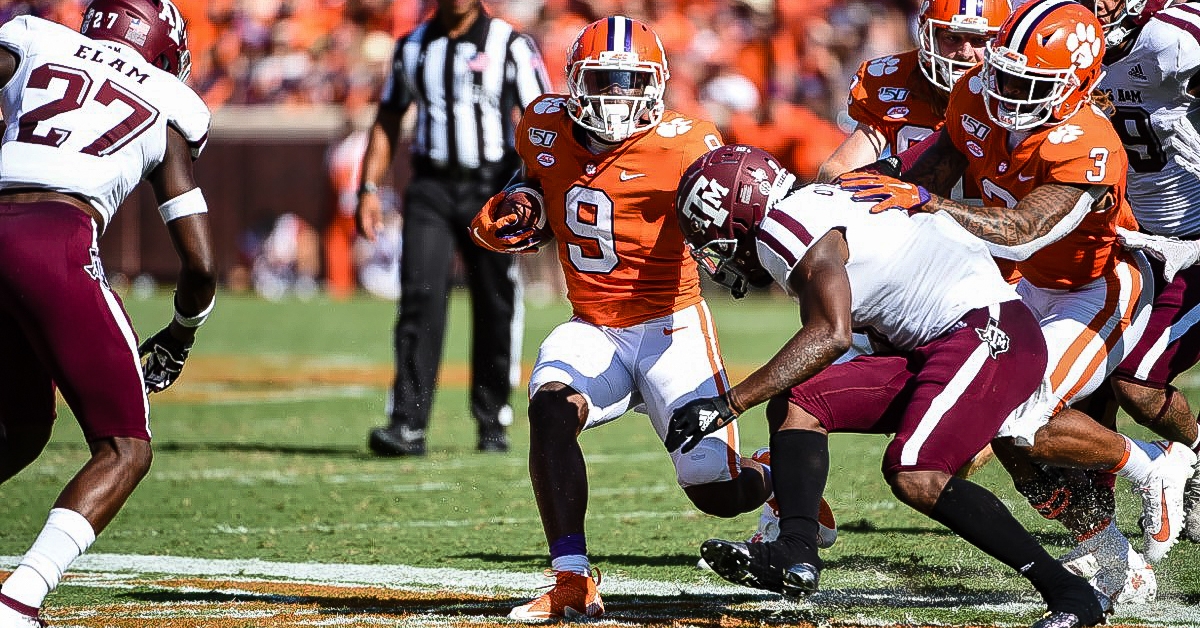 Clemson opened as a 24-point favorite over a Syracuse team that gave up 63 points in a loss to Maryland Saturday, but Tiger head coach Dabo Swinney has no doubt that No. 1 Clemson will get the Orange’s best shot.

"No. I don't have a doubt. They went 4-8 on the season when we lost up there,” Swinney said on his Sunday evening teleconference. “That game got away from them yesterday. If a 4-8 team can beat us, a 1-1 team can. That game got off to a bad start for them. Maryland also is probably better than some people think. That has nothing to do with this game, though. This is a division game. They are going to be confident. They beat us there last time and almost beat us last year. They'll want to get their season back on track."

“I'm really proud of our team. It was a tough, physical game,” Swinney said. “Texas A&M is going to be a really good team and will win a bunch of games this year, so I'm proud of our guys for how they controlled the game. We have two big wins under our belts now. A lot of positives but still a lot of room for improvement.

"Offensively, it was good to see us throw the ball like we did. We had just three drops. We got our running backs involved in the passing game. We had a bunch of big plays and three drives of over 80 yards. We had a slow start, but responded well in the second quarter. But again, so much we can improve on. I don't have any doubt we'll do just that.”

Swinney was especially proud of a defense that allowed the Aggies just 289 yards.

“Defensively, I just thought they accepted the challenge. A&M put 500-something yards on us last year,” he said. “They only averaged two yards a carry and we affected their quarterback. We created two turnovers, sacks, a bunch of negative yards. A lot of positives but still a lot of things we can improve on. We need to make more plays that are there.”

Swinney said Brent Venables and his staff deserve credit for the gameplan and the performance, but so do the players.

“A ton of credit goes to them and the players. The player has to buy in and has to execute the plan. Brent would be the first to tell you that,” he said. “It takes great preparation to get players ready. Our staff does an awesome job. Brent is just phenomenal. We study all year long. We're always trying to get better. From year to year your personnel is different, so you try to maximize different options you have. It was an excellent plan. We played a team with a lot of different personnel groupings, so that allows us to be more creative. And we really like our experience on the back end. To control the line of scrimmage also was critical. I'm just so proud of our staff and especially these players for being coachable, taking ownership, their energy and physicality and commitment to one another. It was fun to watch."

"Injury-wise, we're in good shape. We came through it pretty good. We'll get back at it tomorrow at practice."

“He came back in and was able to play. Had a big sack. He's sore, just like a lot of guys who get sore in a game like that. But he's fine."

"We'll work him back in. He's still working his way back into football day-to-day shape. It's huge getting him back. He is a great player. He's very dynamic, tough, a great leader and can do a lot of things with the ball. He gives us a guy we trust as a return man as well. Once we feel like he's where he needs to be, we'll see his opportunities go up."

“It gives us great momentum. Huge. We're 2-0 entering week three. It gives us confidence and belief in what we're doing and how we do camp. The new guys don't really know. It creates buy-in. We play big games and have won them. So many positives that can come from that. It's been a big opportunity for us to get a lot of people work despite playing two power 5 teams. That should pay big dividends. We have so much more to teach from, too."