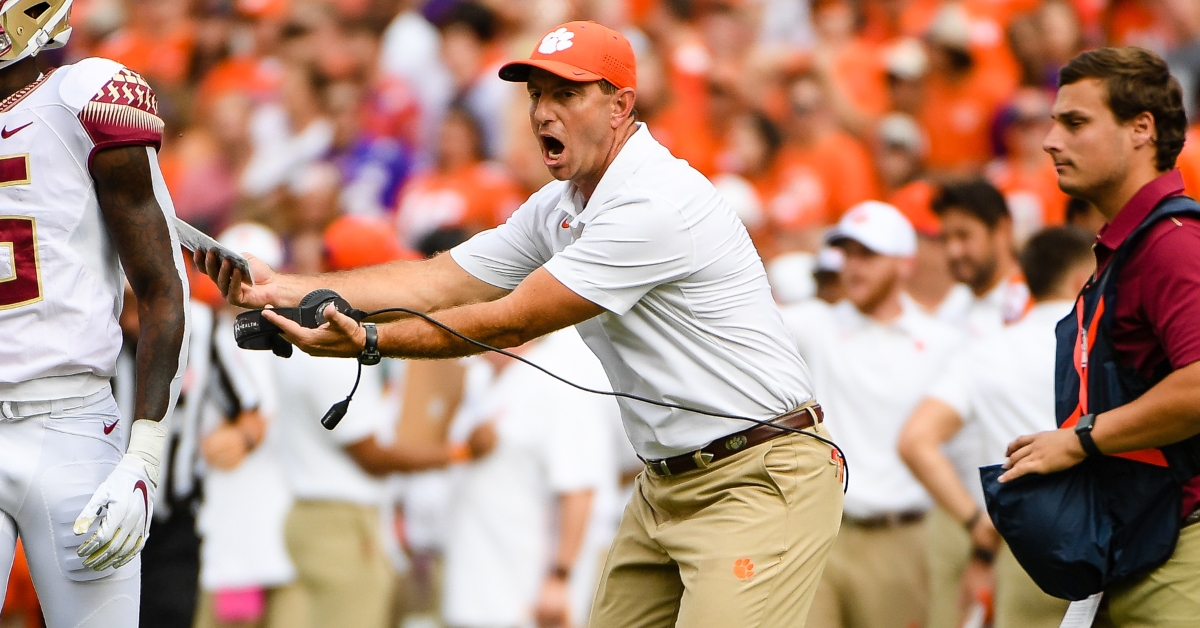 Swinney yells at the referee during the win over FSU

CLEMSON – Clemson heads to Louisville with a change at placekicker.

No. 2/3 Clemson defeated Florida State 45-14 Saturday in Death Valley and will travel to Louisville for a noon kick against the Cardinals. Louisville QB Evan Conley’s 41-yard touchdown run on fourth-and-one with 2:15 left provided the cushion the Cardinals needed, as the Louisville (4-2, 2-1 ACC) pulled off a 62-59 upset of No. 19 Wake Forest (5-1, 1-1).

“We need another great week of practice this week,” head coach Dabo Swinney said on his Sunday teleconference. “We go back on the road with another division game against Louisville, who just beat a ranked, undefeated team at their place and we know they will have a lot of confidence. For us, it's back to work tomorrow and try to hone in and correct some of our mistakes and take the opportunity to teach these guys and continue to have the edge that it takes.”

One change in the lineup – Steven Sawicki will take over at kicker after B.T. Potter missed a 24-yarder in the second quarter that moved him to just 5-for-9 on the season. Sawicki later kicked a short field goal and has the job for now.

“Right now, he's got the job going into Louisville. He earned that on the field,” Swinney said. “Again, at some point you have to give somebody else a chance. Potter has done an amazing job as a kickoff guy and he is as talented a kicker as I've ever been around. Super, super talented. And he's going to be a great player. He will play in the NFL. He will be a great pro. I don't have any doubt about it. But he has to grow up and mature a little bit and really mentally just be focused and be ready. Two easy misses in the last two games. And yeah, it's no big deal in a 28-0 game, but if we make that easy one up at North Carolina then we aren't in that situation at the end of the game. So they add up and they matter.”

Swinney said he needs to see more urgency out of Potter.

“His sense of urgency has to improve. And confidence - sometimes you lose your confidence a little bit. He had an awesome camp and got off to a good start and all of that, but has just kind of hit a little bit of a funk,” Swinney said. “And sometimes you just need to go sit and compete. Again, you have to give somebody else an opportunity if you aren't getting it done. Those are points. Sawicki went out and took advantage of his opportunity. He's been very accurate. Potter would still definitely be the long field goal guy for sure, but on these short field goals, which is where BT has been struggling, then Sawicki is the guy right now. Again, practice matters so we will see what happens this week in practice but it's up to BT to go win it back. Maybe that is what he needs. We will see him respond and hopefully Steven will step up and take advantage of his opportunity.”

“Tee (Higgins) has a very mild strain of his hamstring. The same thing for Jake Venables. Frank (Ladson) kind of rolled his ankle. Those guys will get treatment and all that hopefully will be ready to go. Other than that we came out from the game pretty good.”