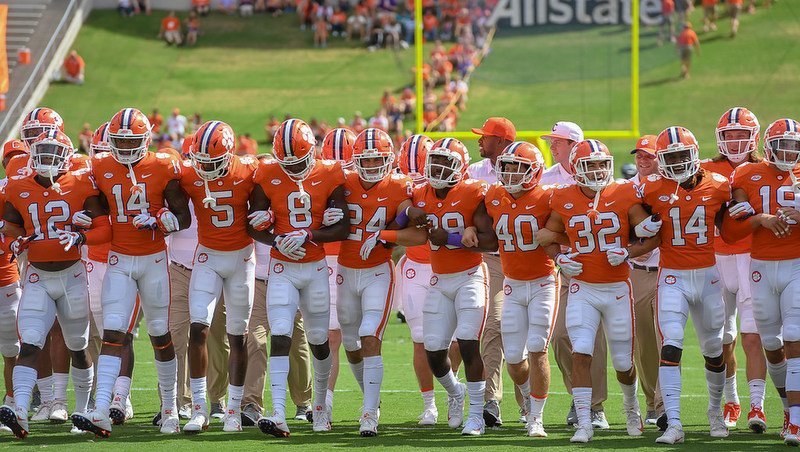 The first quarter of the season is complete and the Clemson Tigers are 3-0 heading into Saturday’s contest at Georgia Tech, but there is still room for improvement. Plenty of room.

"Just really proud of our team coming off a good win. I want to thank our fans for such a great environment yesterday,” Swinney said on his weekly Sunday teleconference “It turned out to be a beautiful day in Clemson. Just an incredible crowd.

"The first quarter of our season is over. We hoped to be 3-0 and we are, but we have a lot of improving to do. We have to get better in a lot of areas. We will work hard to use the things that we have to correct what needs to be corrected. A lot of work as coaches to help this team to reach its potential.”

Next up is a Georgia Tech team on a two-game losing streak, and winning in Atlanta will require the offense to be more efficient.

"We have a huge game this week. It's a conference game. It's a huge challenge. We know we will get their best,” Swinney said. “For us, it's about studying the positives and work on details. The biggest issue Saturday was three straight drives with no points. That was disappointing as far as not finishing. We have to clean that up. I thought our tempo was better. We were more efficient.

“We've become explosive again. We had 15 explosive plays. That's a run of 12 or more and a pass of 16 or more. We had no sacks by our offensive line. Our protection was pretty solid. Our backs were productive, so a lot of good things. But the turnovers, some details and execution, those were disappointing. We want that hunger to finish these drives, to get all that's there. This will be a good tape for us to watch.”

“Defensively we got better. We played four quarters. Our mental errors were way down. We had five sacks, which is hard to get with a team like that. We played with good attention to details. I loved our effort. Both sides played hard. If we can get that every week, we'll keep improving.”

"Special teams, the biggest thing was two missed kicks. We had some penalties on punt return.”

"Injury-wise, Kelly Bryant is doing good. Much better. We'll get him back out there tomorrow. He will be in a green jersey tomorrow. It won't change anything for him. We don't hit quarterbacks anyway.

Cade Stewart was a little better today. We're hopeful with him. Other than that we're in good shape."

Will Bryant practice this week?

"I don't see any reason why he won't. He got hit in the chest and it affected his breathing a little bit. That's what they were scared of. He was good last night and good today when they checked him out. Anything can happen, but he'll be in practice tomorrow. Barring anything crazy, I don't see why he won't play."

Trevor Lawrence and his development

"We have confidence in him. He's just going to continue to get better as he gets experience. He got off to a good start against Furman and then on the road in that environment was an awesome experience for him. He'll be on the road again this week. You only know what you know, so that will bode well for him. It'll help him. He really played well yesterday. He has a good feel, a good command for what we're doing. He'll make some freshman mistakes, but he's not a typical freshman. We're very confident in him. Absolutely. It's great that he has gotten three good games under his belt. We wanted to be able to have more than just one guy from an experience standpoint. We knew we had three guys we could win with coming in, but two had no experience."

Will playing so many players pay off later this season?

"I don't know. I know we've won a lot of games. I don't know. I just know that we try to play as many guys that deserve to play, as much as we can. We have a few guys who are 50-50, but as you've heard me say many times this guy may get 80 percent and the other guy get 20 percent. But that 20 percent may be critical to that player and our team. So it's huge by the end of the year, a team with a lot of tread on their tires. I've had teams that were on fumes. We've always wanted to develop depth when there have been opportunities to do so. Plus, it creates competition. We'll do what we have to do to win. If we have to play one guy every snap, we'll do it. We've done that.

"We certainly want to play guys that deserve to play, too. And we want to do that in critical situations. That's how you get better. We're playing guys not just when the game is under control. It creates buy-in, trust, competition and depth. All of those things bode well for us."