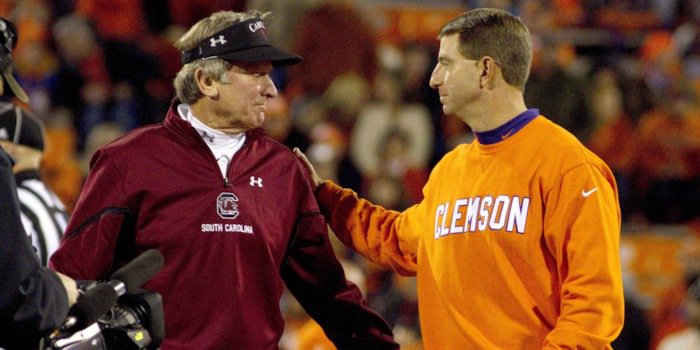 Clemson head coach Dabo Swinney and former Florida and South Carolina head coach Steve Spurrier are good friends, but that didn’t stop them from trading barbs when Spurrier was with the Gamecocks. Spurrier admitted Thursday that he thinks Swinney is one of the nation’s best coaches, but couldn’t believe Swinney would put pressure on his team like he did with his famous “They’re not Clemson” rant in 2011.

Spurrier, on the First Team with Taylor Zarzour and Greg McElroy on SiriusXM Thursday, talked about that night and his thoughts on Swinney during a Thursday segment. Spurrier started off by saying that he thinks Swinney is one of the nation’s four best coaches, along with Nick Saban, Urban Meyer, and Jimbo Fisher.

“When you think (the best coaches) you think of Ohio State, obviously Alabama - No. 1 in recruiting every year - Jimbo Fisher at FSU and Dabo at Clemson,” Spurrier said. “Being a top coach and a top recruiter certainly goes hand-in-hand. All four of those schools and all four of those coaches do a super job with that. Dabo is an excellent coach.”

Spurrier then told a story about how Meyer was shocked to learn South Carolina once owned a five-game winning streak over the Tigers.

“You know we won that five in a row. It was a funny story. They have those awards ceremonies in Atlanta before the Heisman and they had the four teams that were in the playoff - Nick Saban was there, Washington, Dabo and Urban were all sitting in a room and we were talking about this, that and the other,” Spurrier said. “We were mainly talking about when Dabo was at Alabama and Stallings was the coach and we were at Florida. He was telling us some Coach Stallings stories and about the games with Florida. Then we started talking a little bit to each other and Dabo mentioned that South Carolina had beaten him five years in a row and Urban was shocked because Clemson was beating Ohio State and Oklahoma and just about everybody else during that time.

“Dabo said, 'We were beating everybody except South Carolina and Florida State.' For some reason, we (South Carolina) had that run on Clemson and they just didn't play well. They had all kinds of turnovers. I don't know if they got uptight. I don't know if they were trying too hard, but they did not play close to their best and we were fortunate to beat them from 2009 through 2013. He knew that I would say for some reason they just don't play when we play them. I don't know what it is, and they didn't. They would have four or five turnovers a game and we'd have one. It worked out. They're doing well now. That was just a bad stretch for Clemson and a good stretch for the Gamecocks.”

Spurrier finished by saying he was a little surprised with Swinney’s rant, simply because the Tigers were preparing to face Virginia Tech.

“He did, and amazingly he threw all of that out when they were getting ready to play Virginia Tech for the ACC Championship,” Spurrier said. “They had already lost to us and one of our radio guys that somebody tried to attribute as something I said, but I didn't say it. He said, Clemson may not be like this, that or the other but they're certainly not Alabama. They put that on me, but I did not say that or I would've fessed up to it.

“He came out with those quotes and then they came out and beat Virginia Tech, so he put a little pressure on himself the week of the ACC Championship. You would've thought he would've said, 'We'll worry about those guys next year,' but it worked out. Dabo is a good guy. I really like him and he does a fantastic job of building the family atmosphere at Clemson. You've got to give him credit. Those players all love each other. The coaches love each other and they have something really special going.”