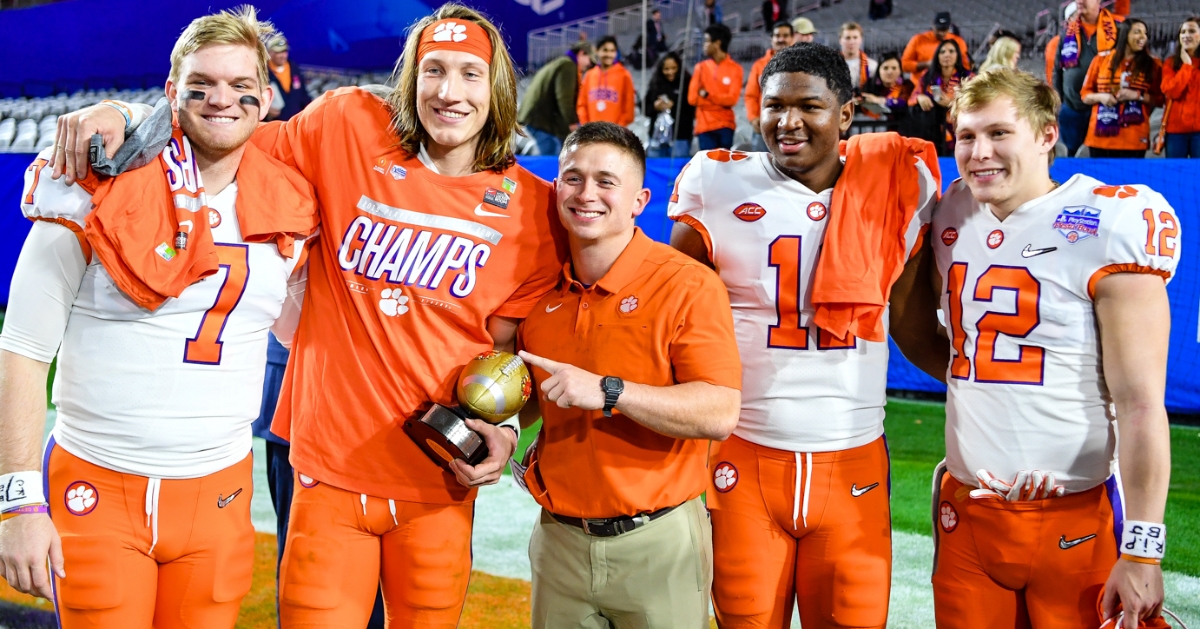 Only Chase Brice (left) is out of the picture this spring.

Clemson brings back arguably the best quarterback in the country, but many eyes will be on the top-ranked passer in the 2020 class.

How does Trevor Lawrence respond to his first collegiate loss?

Lawrence didn’t get the credit he deserved last season. Were the expectations too high? Maybe. Were the criticisms too harsh? Definitely. Lawrence admittedly threw some passes he shouldn’t have early in the season, but after the first quarter at Louisville, his numbers matched up with any in the country. It was his running ability that helped beat Ohio State in the Fiesta Bowl, but it was in the Fiesta that he took a shot -- and I’m convinced he wasn’t 100-percent healthy against LSU in the title game. If you remember, he injured his shoulder making a tackle against Georgia Tech in the opener and wore a harness on that shoulder at least part of the season.

He will once again be branded as a Heisman favorite (however, Clemson’s schedule doesn’t set up for him to win a Heisman, nor does Clemson’s substitution pattern) and he will be lauded by many as the best quarterback in the country, me included. But this is the year he will be eligible for the draft, and the critiques will continue to flow as draft pundits and NFL teams try to figure out where he fits in the draft.

So how will he respond to all of this? He will likely shrug it all off and smile and go about his business like he normally does – at least in the public eye – but internally I am sure he will be driven to show he’s the best.

How quickly can D.J. Uiagalelei learn the playbook?

Let’s face it, we all want to see this kid sling it all over the yard in the spring. He was able to practice twice with the team before the title game, then spent time working with Steve Spurrier in Hawaii and came back to Clemson in time for mat drills. In other words, he hasn’t had a lot of time to spend with Brandon Streeter and Tony Elliott. And from what we’ve seen in the past, it takes at least half of spring practice for new quarterbacks’ heads to stop spinning. It’s about that time that the scrimmages start and we will get to see how much of the playbook he’s learned.

He’s in an intriguing spot – if Phommachanh takes firm hold of the No. 2 spot, the coaches have the luxury of redshirting Uiagalelei. He would be able to play in four games and take his redshirt and still have all of his eligibility. If he’s as good as advertised and learns the system, they may not want to do that. If he struggles, they have that option.

Can Taisun Phommachanh take hold of the backup spot?

Clemson’s backup quarterback over the last two seasons, Chase Brice, departed for Duke, leaving redshirt freshman Taisun Phommachanh to battle freshman D.J. Uiagalelei for that title. Phommachanh was the beneficiary of the redshirt rule allowing players to appear in four games, while still being able to maintain their redshirt status. The Connecticut native appeared in three games and completed 6-of-12 passes for 85 yards and rushed for 56 yards on 12 carries in 43 snaps. Even when he wasn’t in the game or getting reps in practice, passing game coordinator Brandon Streeter said Phommachanh was extremely engaged.

Can he take what he learned in his limited game experience and take the next step in solidifying that No. 2 spot in the quarterback rotation?