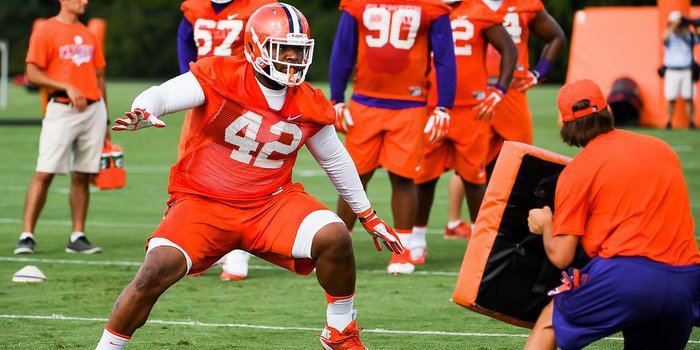 Wilkins can do it all for the Tigers

CLEMSON – Slash is ready to do whatever it takes to ensure his team’s success, even if that means playing defensive end.

It was learned Tuesday evening that projected defensive starter Austin Bryant would miss the season opener at Auburn after he suffered a stress fracture in his right foot during Monday’s evening practice session. Bryant’s loss leaves the Tigers thin at defensive, with Richard Yeargin (147 snaps) and Chris Register (14 snaps) the only true ends on the roster who played last season.

Enter Christian Wilkins, the freaky athletic defensive tackle who took snaps at end during spring practice. Wilkins had been practicing at tackle through the first part of camp, but he took snaps at end Tuesday as he prepares for what might an increased role for Brent Venables’ defense.

“I had to get a few reps out there today,” Wilkins said after practice. “I just got some work to create a little more depth over there and just to get comfortable with me out that wide. I'm just trying to get more reps and get used to playing outside.”

Wilkins considers Bryant one of his closest friends and hated to see the injury, but he said Bryant is in good spirits and the Tigers will overcome the setback.

“I'll just continue to preach what we preach - it's the next man up mentality. We love Austin,” Wilkins said. “It's unfortunate that he had the injury. That's one of my best friends on the team so I would hate to see him go down because I really wanted to see him step into a starting role. When he comes back, I'm sure he'll be better than ever. It's unfortunate right now that he has to be injured and won't be able to start the season with us.

“He was in good spirits. He knows that he'll be back. He's going to work hard to try and get back and get healthy. He's going to do his best now that he's injured to get the other defensive ends in the room ready, too, and make sure that he steps up as a leader so that this doesn't tear him down.”

Wilkins said he will handle this development like he does everything else – head on.

“I'm just going to attack it hard and try as best as I can to gain knowledge of playing outside. It's a little different playing inside,” he said. “You have a lot more different responsibilities and you have to find different ways to beat guys. I'm just going to get in the film room and study as hard as I can. I'll get with the other defensive ends and Coach (Marion) Hobby and pick up everything that I can to make sure that I can do an efficient job out there and also prepare myself to play inside.

“You're playing in more space, for one. For two, there's a lot more things that can happen. You've got down blocks from the tackle. You have sniffers and fullbacks coming at you. You have to watch the quarterback. You may have to drop into coverage. It's just a lot more things that you have to do that I'm not used to doing playing defensive tackle.”

He also knows that he isn’t the only option.

“All of the guys are working hard,” Wilkins said. “They're all stepping up. They're all hungry and competing as hard as they can every day to try and get better and be in a position to help and contribute.”

One of those options is former tackle Jabril Robinson, who moved to end earlier in camp. Wilkins said he and Robinson are trying to help each other with the change.

“We're just really trying to figure it out together a little bit. What he can help me with, he'll help me with and what I can help him with I help him with,” Wilkins said. “Even though I started off camp playing tackle, I still tried to pick up everything the whole defensive line was doing. If he doesn't know something, I'll try to tell him the responsibility of the defensive end. He knows more techniques since he's had a little more time out there so he'll tell me.”

He then said he wasn’t going to stress about Bryant’s loss – he’s simply going to play the game the way he knows how, whether it’s at end or tackle or catching passes on fake punts.

“Just have faith in the next man up mentality. Them having guys like they did last year around them, that made them a lot better. They're working hard. They're working as hard as they can. Just because now I'm getting reps at end, the other defensive ends aren't just sitting back in the room like, 'Okay, Christian's got it.' They're still working hard and they're like, 'We want those reps. We want to play. Christian, you stay inside.' They're all still working hard and grinding as hard as they can.”

One factor that will help Wilkins if he has to play end? His weight. Or lack thereof.

“When I got here I was about 295, then blew up around 320 by the end of last season,” he said. “And then I got back down to 300. That’s where I want to stay. I definitely feel like I still have that explosion. In some ways playing inside will help me when I play outside. Trying to move someone like Tyrone Crowder or Taylor Hearn, you're moving 330 pounds compared to moving 300 pounds on the outside. They're a little more athletic, so that's another challenge that I'll be facing outside.”