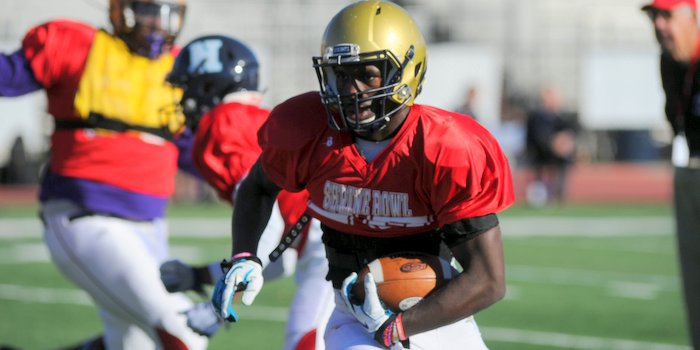 Tavien Feaster played the last two seasons of his high school career with a torn labrum, forcing him to wear a confining shoulder brace. Despite the injury and brace, however, Feaster still went out and became one of the top running backs in the country and now he’s ready to show what he can do when healthy.

The 2016 running back commit out of Spartanburg (SC) will have surgery to repair the torn labrum on February 26th and will begin his rehab shortly after the surgery.

Feaster told TigerNet earlier this week that he’s looking forward to finally having the procedure, an event almost two years in the making.

“During my junior year, I tore my labrum in one of the first football games of the season, and I was out. I went to the doctor, and they told me, 'You can get it done now or you can wait and finish the rest of the season.' That is why I wore an arm brace on my arm,” Feaster said. “It was either that or just wait, and I ended up playing basketball last year. I was hardheaded. I should have just done it last year, but I didn't because I wanted to run track, too. And then summer came around, and I had all of those events to go to in the summer. I was stuck in the middle of everything, and I thought I would do it at the end of this football season because I wouldn't be doing anything. It will give me time to rest. I am not playing basketball this year.”

Feaster will enroll at Clemson over the summer, and he hopes to be cleared for contact by the second week of fall camp.

“I will be enrolled at Clemson before I am back to 100 percent. They told me I can start running whenever I am ready to start working out,” he said. “I think running track will help me with the range of motion in my arm. I can start lifting a month and a half after - the heavier stuff - and then the doctors can clear me. But contact wise, I should be ready to go if not the first week then the second week of practice.”

Despite the injury, Feaster managed to post strong numbers as a Viking and turn himself into one of the nation’s most coveted backs. As a senior he had 1121 yards rushing and scored 10 touchdowns and added 64 receptions for 976 and 12 touchdowns as a receiver. As a junior, Feaster had 133 carries for 1153 yards and 15 touchdowns, and 45 receptions for 1016 yards and 11 scores. In the 2014 state title game, he rushed for 130 yards and two touchdowns on 26 carries, and also had five receptions for 132 yards and a touchdown.

Feaster can only imagine what he will be able to do when fully healthy.

“It slides out of place when I am playing, so it gets to hurting pretty bad when it slides out of place. I had to wear that brace so I wouldn’t pull it out of place when I was playing,” he said. “But when you are wearing that brace you are never at 100 percent. So the last two years I've been going at 90 percent so it will feel really great to get it fixed. I feel like if I can play at 100 percent, I will have more confidence. I won't be worried about going out there and reinjuring the shoulder or having that brace on. I can hit it full speed and it's going to be excellent.”

A consensus top 50 player nationally…played in U.S. Army All-American game…first-team USA Today All-American…ranked as No. 14 player in the nation by 247 Sports, he is the No. 1 running back and No. 1 player in South Carolina…ranked No. 27 overall player by Scout.com, No. 38 by Tom Lemming and No. 57 by Prep Star…ranked as No. 53 player by ESPN, the fifth best running back and the top player in the state of South Carolina… voted Mr. Football in the state of South Carolina for 2015 and Mr. Track as a junior in Spring of 2015…Gatorade Track Athlete of the Year in South Carolina as a junior…played for South Carolina in the Shrine Bowl…as a senior had 1121 yards rushing and scored 10 touchdowns…had 64-976 and 12 touchdowns as a receiver…as a junior, Feaster had 133 carries for 1153 yards and 15 touchdowns, and 45 receptions for 1016 yards and 11 scores…so he had at least 1000 yards rushing and receiving during 2014 season…almost did it as a senior with 1121 rushing and 976 receiving…In the 2014 state title game, he rushed for 130 yards and two touchdowns on 26 carries, and also had five receptions for 132 yards and a touchdown…had a 44-yard interception return on defensive side of the ball in 2014…. as a sophomore, he had 171 carries for 1,429 yards and 15 touchdowns on the ground and 44 receptions for 723 yards and 12 touchdowns…for his career in 37 games, had 459 rushes for 3703 yards and 40 touchdowns…had 153 receptions for 2715 yards and 35 touchdowns…scored 78 total touchdowns in his career…had six games in his career in which he had at least 100 yards rushing and 100 yards receiving…had five games with at least 200 yards from scrimmage as a sophomore…went over 200 yards from scrimmage in each of his last three games as a junior...finished career with 6,562 all-purpose yards and 6,418 yards from scrimmage, an average of 173.5 yards per game…. Mr. Track in the State of South Carolina as a junior…all-region in track from eighth grade through junior year…all-state all four of those years…a four-year region champion and the state champion in the 100-meter dash and 200 (21.29) as a sophomore and junior…has state record in 200 at 21.11 and the 100 meters at 10.42…4A Track Athlete of the Year as a sophomore and junior….from same high school as former NFL and Auburn running back Stephen Davis…played his high school football for Chris Miller at Spartanburg High School…ran track for Glover Smiley….selected Clemson over offers from South Carolina, Tennessee, Auburn and Georgia…recruited by Jeff Scott and Tony Elliott.