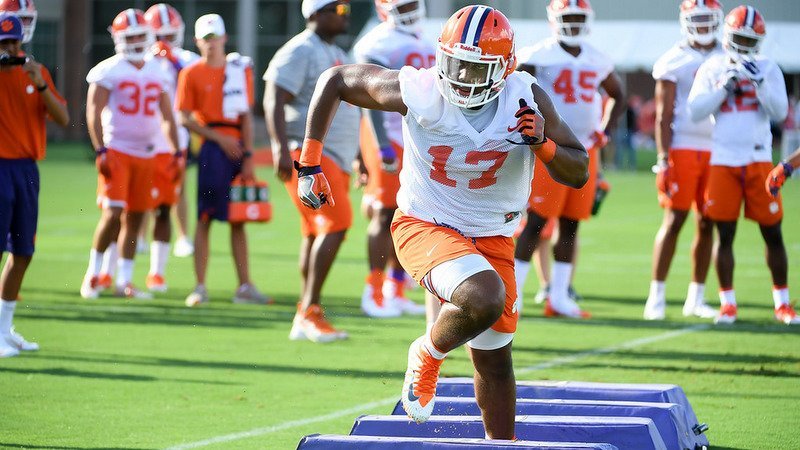 Mascoll does through drills during fall camp

Clelin Ferrell left his mark at Clemson with his play on the field, but his biggest contribution to the program happened when nobody was looking. It happened when Ferrell took the younger guys aside for lessons, big brother talks, and advice on how to attack the college game. Justin Mascoll is a prime example of those lessons.

Mascoll is the 6-4, 255-pound defensive end out of Snellville (GA) South Gwinnett that redshirted this past season. He appeared in one game this past season, logging eight snaps against NC State in October.

Mascoll told TigerNet that he learned a lot of lessons during his redshirt year, many of them taught by Ferrell.

“It's been a challenge and a grind, but I accepted the grind,” Mascoll said. “Just following behind guys and having them take me under their wing, guys like Clelin Ferrell and Justin Foster, and keeping me focused and keeping my eyes on the prize and the process has been good. It's been a good year for me.”

Ferrell’s first lesson happened on the first day of practice for the opener.

“The first day of practice, I think we were playing Furman that week, and I got put on the scout team,” Mascoll said. “I was told that I was getting redshirted, and Clelin yanked me over and said, 'You know why you are over there, right? Get your mind right, keep your eye on the prize and don't waste any time. You have to get stuff done, so let's go.' From that point on, I was getting stuff done.”

Redshirt players spend the time before practice with strength coach Joey Batson and his team in Power Hour, a time set aside to get the younger players stronger.

“It's a blessing, to know that all of the work I have put in this year getting my body right and getting my mind right and just staying ready for this opportunity is going to pay off,” Mascoll said. “Even if that doesn't happen, it's still a blessing to be at this stage and get this experience. I just know that whatever happens, I am ready.

Who does he model his game after?

“I haven't really had too many guys that I have modeled my game after,” he said. “I have been looking at Kevin Dodd, when he was at Clemson, and how he used his hands and stuff like that. People swear that I look like him, so I guess he's a cool guy to model my game after.”

Mascoll said he’s been learning as he goes but hasn’t been overwhelmed by the college game.

“I have been learning my alignments and my assignments and where I am supposed to be and when I am supposed to be there,” Mascoll said. “I have to know the different adjustments and stuff like that. It's hit me a couple of times, but it's football at the end of the day. I've played football for years, so it's just a matter of adjusting and getting used to the speed and getting my body right and taking advantage of everything that is given to us.”