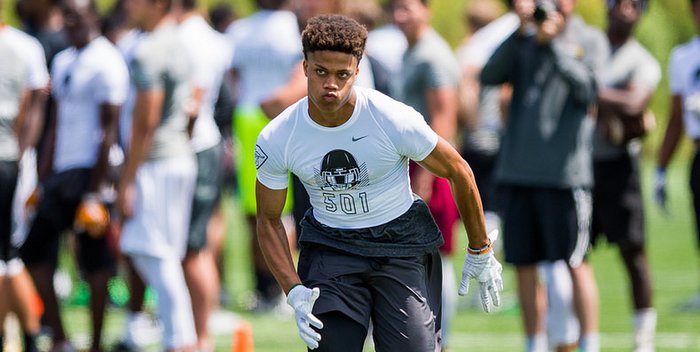 Jordyn Adams will make his decision at The Opening

Clemson’s coaching staff has been on the road recruiting for the spring evaluation period the past few weeks, checking in on new prospects and handing out a bevy of offers as we close in on head coach Dabo Swinney’s high school camp in June.

There’s a lot to recap from the past week, so let’s get started:

*2018 wide receiver Jordyn Adams announced Thursday evening that he will be announcing his college decision at The Opening in Oregon. Adams earned the invite with a strong showing at the Nike Charlotte Regional earlier this month.

Adams, who is down to Clemson and North Carolina, told TigerNet that he stays in constant contact with Clemson coaches Jeff Scott and Brandon Streeter.

“Really every other day or so, Coach Scott or Coach Streeter texts me and asks about baseball and things like that,” Adams told TigerNet. “We talk pretty often, and my relationship with Coach Scott is getting better every time we talk. He tells me that he really wants me and they're waiting on me.”

To know that the national champs are waiting is almost like a dream come true for the 4-star wide receiver.

“It makes me feel good and really blessed. It just shows that my hard work is finally paying off,” he said.

McNeill picked up a Clemson offer last month and was on campus in late April. He also wants to play baseball.

*Defensive coordinator Brent Venables reached out with an offer to 2019 defensive end prospect Nolan Smith, who is at IMG in Florida. Smith is a Georgia commit, but told TigerNet that Clemson has a shot.

“Clemson definitely has a shot. I know a lot of boys up there. I used to go to Calvary Day School and the tight end that went to Calvary Day School will hopefully be the starter this year,” Smith said of Richard. “Me and him are really close. I'm going to stay with him this summer for three days at Clemson. That makes them have a shot because he tells me a lot about them and the program and the caliber of program they have.”

Upshaw has been told that if a junior declares early for the NFL Draft (from Clemson) he will have a scholarship from the start. If that doesn’t happen, he would grayshirt until January. With several top juniors on the roster, the guess is a spot is as good as open.

*3-star safety DeMarvion Overshown out of Arp (TX) also released his Top 15 Thursday, and Clemson made the cut. Overshown collected 16 offers in February alone and his recruiting has been heating up. He earned second-team all-state honors as a junior in 2016, when he had 153 tackles, six tackles for loss, three interceptions, one forced fumble and a fumble recovery.

*As the Clemson coaching staff made its way through the Lone Star State, they dispensed an offer to 3-star athlete Taye Barber out of Cypress Springs. Barber - who has played mostly offense, but is being recruited as a defensive back has offers from Arizona, Arizona State, Clemson, Fresno State, Houston, Indiana, Iowa State, Kansas, Minnesota, Missouri, New Mexico, Oklahoma State, Rice, SMU, TCU, Tulsa, Utah, West Virginia, Wisconsin, and Yale. His first offer was from Oklahoma State.

The 2019 prospect took home top linebacker honors at Nike’s The Opening Regional in Charlotte earlier this month, and he told TigerNet that Clemson will remain under strong consideration as his recruitment progresses.

“I’m going to go ahead and spoil it and tell you Clemson is in my top 10,” Pappoe told TigerNet recently. “It’s just the family environment. My old head coach (cornerbacks coach Mickey Conn) is over there now so I know I’ll always have people over there that care about me.”

*Four-star and 2018 defensive tackle prospect Darnell Jefferies announced Thursday that he has received an invite to the U.S. Army All-American Bowl.

Next up for Jefferies?

“Sometime in mid-June I will commit,” Jefferies told TigerNet. “I just want to get in a commitment before my senior season starts. I want to concentrate on my senior season of high school. Clemson is definitely in my group of favorites. I have great relationships with the coaches and the players on that team,” Jefferies said. “And the 2018 recruiting class is keeping in touch with me on a day in and day out basis. Clemson has a very good class, recruiting-wise, and I’ve pretty much played with all of them. I played with Xavier, Justin, and Trevor on a freshman All-American team. I know all of them.”

*Running backs coach Tony Elliott has stopped in twice recently to see 2018 running back prospect Master Teague, but the Tigers still haven’t pulled the trigger on an offer. Teague told TigerNet that last week that he was close to trimming his list to three, and the Tigers would be on the list if an offer came. It didn’t, and Teague released a top three of Auburn, Georgia, and Tennessee.

*The Tigers could still be waiting on 5-star running back Zamir White out of North Carolina, and Elliott stopped in to see White this week. From everything we’ve heard from those close to White, however, it’s still Georgia with everyone else trailing.

Wynn was high on Clemson’s radar for a while but wanted to wait to make a decision and the Tigers are almost full on the defensive line for this class. They are also wanting Wynn to play inside, while he wants to play outside. As a result, Wynn has moved on from strong consideration of Clemson.

Pickens still figures highly in Clemson’s plans. We also wanted to see recent tight end commitment Braden Galloway at the Charlotte regional earlier month, but he didn’t make the trip. He will be in Columbia Sunday. Clemson defensive tackle commit Josh Belk is also penciled in to attend.