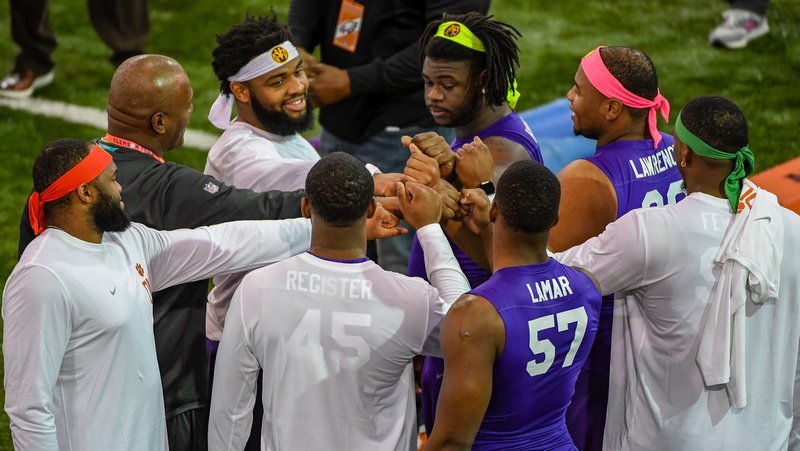 CLEMSON – Thursday’s Clemson Pro Day was all about earning a chance in the NFL and the last hurrah of the Power Rangers.

A record number of 24 players were on hand as scouting personnel from all 32 NFL teams and one CFL team watched. It was announced earlier in the day that Clelin Ferrell suffered a toe injury last week, so he did not participate in drills.

However, Ferrell was on hand to support the other members of his defensive line – despite being draft-eligible (except for Dexter Lawrence) they all elected to stay together and try to win a championship after coming up just short in the 2017 season. That group set the tone for the Tigers’ National Championship season in 2018.

“We are riding out on our high horses right now,” Bryant told TigerNet. “This is kind of like our last hurrah. We found these headbands and said we would rock them at Pro Day.”

“I would say so (it’s the biggest turnout). This is a huge group, especially with the seniors,” Swinney said. “We've had some big groups with lots of juniors or maybe some people that have come back. But as a pure senior group with the three juniors mixed in, definitely the biggest and well-attended. We had all 32 teams here and some head coaches and a lot of GMs and personnel folks. It was a good day.

Swinney said his players are used to the limelight.

“That is the biggest thing - they are well-known and well-seen, they've played in primetime and on some big stages. These guys have kind of grown up in the public eye if you will,” he said. “They haven't really been on the backburner. And with that comes a lot in terms of expectations and scrutiny and things like that, and they've handled it well and consistently well year in and year out. This group, in particular, won 55 games in four years. I was happy for them today; they did `what they needed to do.”

While Swinney was impressed with the Power Rangers and the rest of the well-known participants, he was most excited for the players who didn’t get an invite to last month’s NFL Scouting Combine in Indianapolis.