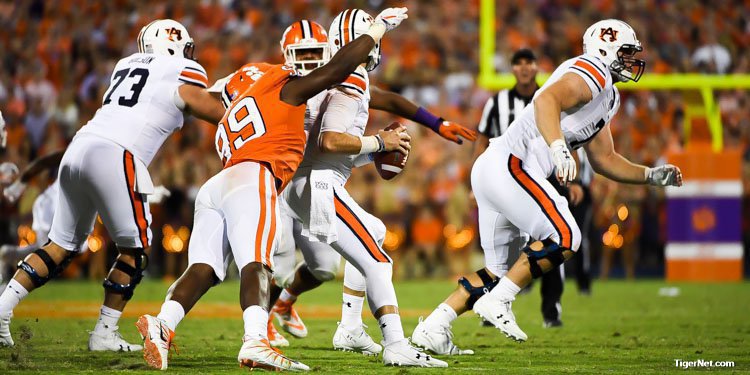 But it doesn’t get much prettier than the performance Clemson’s defense put on Saturday night against Auburn.

That defense dominated a game it needed to dominate as Auburn’s defense was pretty good, too, in a 14-6 win at Memorial Stadium.

Clemson finished with 11 sacks and held Auburn to 117 yards and overcame a slow start by the Clemson offense to lead the team to a 2-0 start. Auburn got off to a terrific start but really did nothing after the first quarter, and all the credit for that goes to Brent Venables’ Clemson unit.

That group was so good that the Clemson offense didn’t really try to do much in the fourth quarter. Needing just one drive to put the game away a couple of times, the offense continued to go three-and-out and punt.

And then the defense continued to step up and make all the big plays it needed to make.

That started early with a goal-line stand to force a field goal. After one of Clemson’s two turnovers, the defense controlled the action again and forced another field goal.

That 6-0 deficit proved to be huge and kept Clemson in the game with a chance to get into an offensive rhythm. That rhythm did finally come on Clemson’s final drive of the first half and then the first drive of the second half as the offense came up with its only two touchdowns of the game on Kelly Bryant touchdown runs.

Auburn quarterback Jarrett Stidham has been all the rage this offseason, but he completed just 13-of-24 passes for only 79 yards and was battered and beaten up by the Clemson defensive front throughout. The Auburn running game had 42 carries for 38 yards, although there was plenty of negative yardage from all the sacks.

Auburn actually ran one fewer offensive play than Clemson (66 to 67) and held the ball for 32:25 to Clemson’s 27:35, but Auburn managed fewer than 20 offensive yards after the first quarter.

I’ve told friends and my sons and written in a couple of different places (and even said it on several radio shows) that this Clemson defensive front could be the best the program has ever had. That starting group of Clelin Ferrell, Christian Wilkins, Dexter Lawrence and Austin Bryant is just nasty, and all four have big-time pro potential. All four showed that Saturday and they got plenty of help from the rest of the defense.

The linebackers helped clog up the Auburn running game and were strong in pursuit, and the secondary was terrific with several of the Clemson sacks coming because of that locked-in coverage.

In short, Clemson’s defense was dominant, powerful and pretty. Just so pretty.