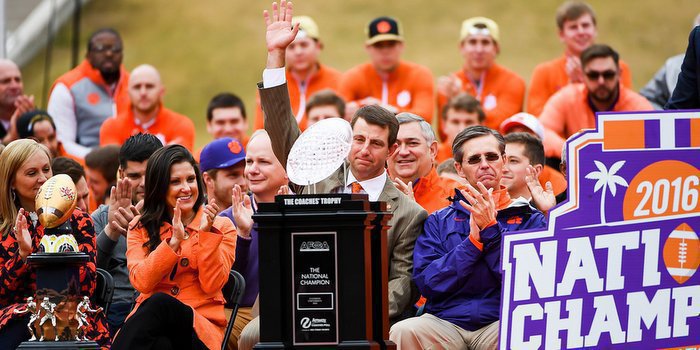 Swinney waves to the crowd during the National Championship celebration

It had been building for years.

And not just last year when the Tigers came so close against Alabama but fell just short, motivating this year’s players who endured that loss to get back to the national title game and get over the hump.

No, this championship run really began when Dabo Swinney took over the program on an interim level and immediately began to change the program’s culture. Known for big-picture talk but not enough attention paid to the details under Tommy Bowden, Swinney’s program has been known for focusing on those details and the little things and letting that focus determine the outcome.

In Swinney’s first full season, the Tigers won the ACC Atlantic Division title and went to the ACC championship game – something Bowden never could do even when Florida State wasn’t very good. Sure, the next year was a struggle in a 6-7 season, but the turnaround since has been remarkable.

Three ACC titles, including the first one since 1991 in 2011 and the first back-to-back titles since 1988 coming this season.

More big wins than fans can keep up with.

And, of course, that second national title with a heart-stopping finish in a 35-31 win over Alabama.

See the progression? That’s why the players involved in that growth all have a part of the championship. It was good to see Swinney and players like Ben Boulware and Deshaun Watson acknowledge those players both on the field and at the championship celebration inside Memorial Stadium.

C.J. Spiller wasn’t in uniform Jan. 9, but he certainly was part of the championship. When Spiller signed with Clemson, it changed the program, and he was a big reason why the 2009 team won the division title and played for the ACC title.

Tajh Boyd didn’t suit up against Alabama, but he was one of only 12 players in Swinney’s first signing class as the head coach, and Boyd broke record after record and won big game after big game as the Tigers’ quarterback. Remember the win over LSU in the Peach Bowl and Boyd giving everything he had to win that game? Yes, it was only the Peach Bowl, but it was a program-changing win.

And there are many others: Sammy Watkins, Nuk Hopkins, Grady Jarrett, Vic Beasley, Eric Mac Lain and on and on. Those players didn’t help beat Alabama, but they did. They helped build the program to move it into this position the past two years, and this year’s group pushed it over the top.

It’s really quite similar to the 1981 team that won the program’s first – you don’t have to say “only” anymore – national title. Homer Jordan, Jeff Davis, Terry Kinard and Perry Tuttle helped lead the team to that championship, but they were only following in the footsteps of players like Steve Fuller, Jerry Butler, the Bostic brothers, Dwight Clark, Archie Reese, Bubba Brown and others who helped build the program from nothing in the middle and late 1970s. Those players didn’t get on the field against Nebraska in that 22-15 win Jan. 1 1982, but they might as well have, considering everything they contributed to the program.

It’s about the program, not just one team, and that feeling was missing at Clemson for so many years. Danny Ford understood that when he was the head coach. Swinney returned that focus when he became the head coach, and now he has the hardware just like Ford.

And their players on those teams, and the ones leading up to the titles, all get to enjoy that.