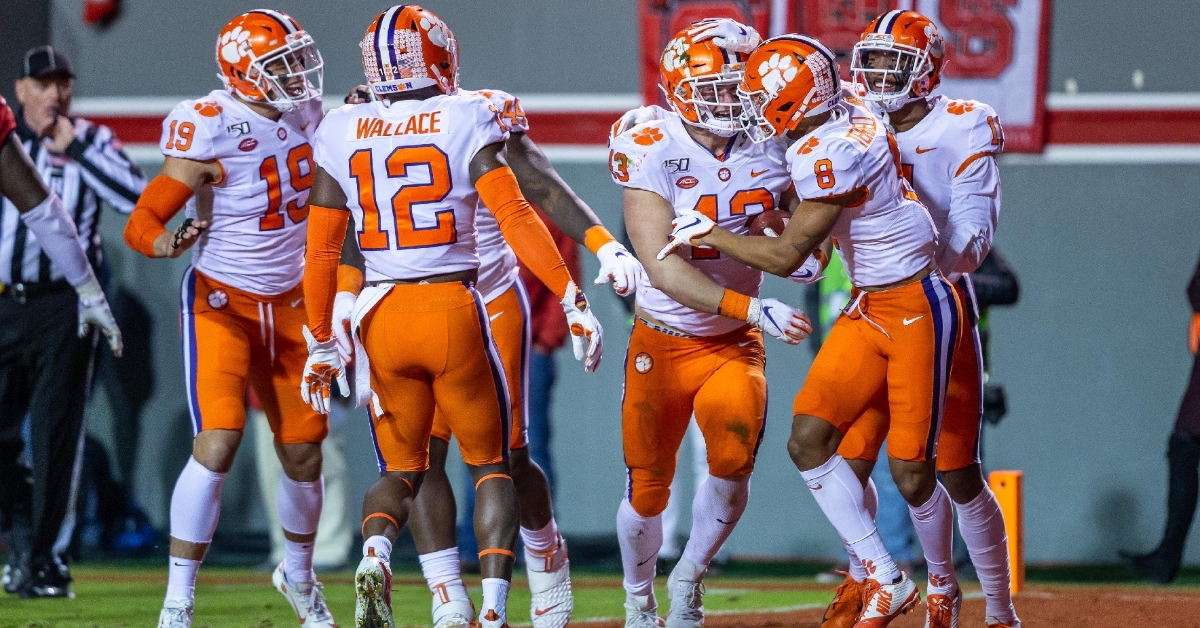 The orange britches are for championship games.

RALEIGH, NC – About 30 minutes before kickoff Saturday night at Carter-Finley Stadium, Clemson head coach Dabo Swinney gathered his team near the visitors tunnel and told them about Wake Forest’s loss to Virginia Tech an hour earlier, and that a win against NC State would clinch the ACC Atlantic Division Championship. He then told them to head into the locker and change into the iconic orange britches.

A decade ago, Swinney mandated that Clemson’s uniforms would follow rules – orange jerseys and white pants at home, white pants and jerseys on the road, all purple for Military Appreciation Day, and orange britches for championship games. The loss by the Demon Deacons was their second in conference play, meaning a win by the Tigers would clinch a fifth consecutive Atlantic Division title.

The players let out a cheer when they heard the news and came out 20 minutes later wearing their orange britches and a smile.

Quarterback Trevor Lawrence said wearing orange pants didn’t cross his mind and that the pants came as a surprise - no one on the team knew the orange pants had made the trip.

“We really didn’t think about it. We had talked about if Wake Forest lost then this game would be for the division," Lawrence said, "but I didn’t even think about the pants. And then we went out and warmed up and then Coach Swinney brought us up (to the tunnel) right there at the end like he always does. He was telling us about Wake Forest and then he told us we were wearing orange pants. So we went and threw them on really quick. We were pumped.”

“That was definitely exciting. Our guys understand. Coach Swinney has done a really good job since he took over as our head coach of kind of setting that up with the uniforms,” Scott said. “When you put on those orange pants, that means there's a championship on the line. The guys knew immediately. A lot of the guys were doing pregame. They didn't really know the end of the Wake Forest/Virginia Tech game but whenever they came in and saw those orange pants, they realized what happened. It just added a little bit more to what we could accomplish tonight. I think they definitely responded and went out and had a great start to the game and a great first quarter.”

“I wasn't really aware of that until after warmups. We got held up and we appreciate Virginia Tech beating Wake Forest and giving us an opportunity to win the division tonight,” Smith said. “Because of that, the orange pants come out during championship opportunities. If we can clinch a division, ACC Championship, bowl games, that's when the orange pants come out. They're special so it's pretty exciting.We were pumped. He brought us up and was like, 'Change out of the white pants, we're going orange pants right now. There's a championship on the line. Atlantic Division on the line and an opportunity to win it.' It really pumped us up.”

Left guard John Simpson said the game was just the first step in what he hopes are a few more championships this season.

“Coach Swinney said it after we warmed up. He was like, 'Go in there and put your orange pants on.' I was like, 'Orange pants? Championship time, baby!' That was a big deal," Simpson said. "Winning the division is huge but that's just the second step - win the opener and win the division,” Simpson said. “Just knowing it's championship time and every game is a playoff to win the whole thing, it's a great feeling knowing we can wear those orange pants and represent Clemson and the paw.”