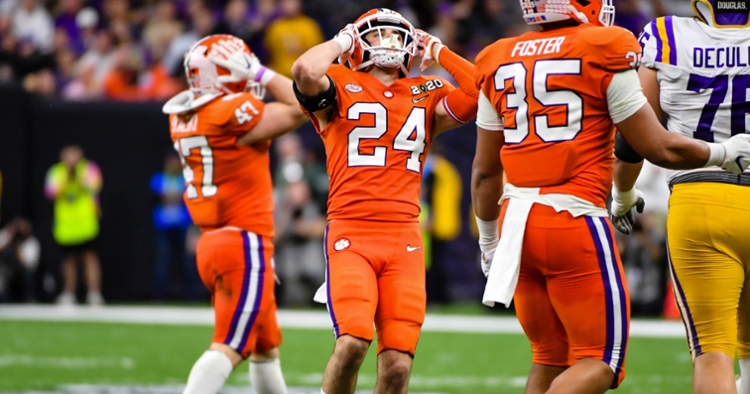 Turner (24) will start at one of the safety spots Saturday.

This offseason has been different to say the least, but despite the delay of the season, football is finally here and safety Nolan Turner has been waiting a while to get back on the field for the Tigers. He had shoulder surgery in the offseason and then the pandemic kept the team from conducting its normal summer routine.

No one is more excited than Turner to get back to work on Saturday.

“We are just super excited to compete Saturday. And looking forward to competing against some other guys other than Trevor Lawrence,” Turner said.

The Clemson defense is a lot younger because they lost a couple of key players last year to the NFL. With so many young guys now, Turner and the veteran defensive players had to step up and become a teacher to those younger players.

“That’s this biggest thing with young guys, is just explaining to them that it is just about doing your job,” Turner said. “These guys made it easy. They are just super committed and obviously all super talented. They’ve really bought in and you can tell they care.”

For Turner, it is important to hold himself to a higher standard in order to get the young players to the level they want to be at. He knows he is a leader on the defensive side of the ball and wants to remain consistent in being a great one.

“I’ve got to hold myself to a higher standard. You got to always continue to be that leader and just lead by example. It’s been fun to be with these guys and hear their questions and kind of be that old head now,” Turner said.

The young defensive players obviously have some learning to do, but there is no doubt they have the talent to be great at Clemson. And they will have a chance to make a difference for the Tigers this year.

“Lannden (Zanders) is just such a good player. He’s super rangy and can really cover some ground,” Turner said. “Joseph Charleston is a physical dude, great tackler. He’s been a lot smarter, getting to learn the defense.”

Other notable young players are Jalyn Phillips and Ray Thornton, who are great athletes and getting smarter every day.

On the offensive side of the ball, the Tigers lost two key wide receivers in Tee Higgins and Justyn Ross due to the NFL draft and Ross’s season-ending spine surgery. Other than Amari Rodgers, the wideouts are mostly young and inexperienced but have great talent.

“The biggest thing I have seen in practice is just speed. They can all move really well, they’re all fast,” Turner said. “You got Amari back for his fourth year and Cornell (Powell) as well. We’ve got ballers all over that wide receiver group, so you’ll see them step up and make plays.”