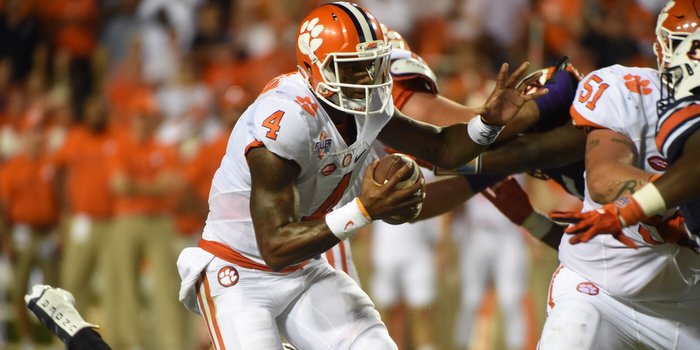 AUBURN, AL – College football’s opening weekend has seen a rash of upsets and improbable finishes, but No. 2 Clemson survived a defensive battle on the Plains in defeating Auburn 19-13 at Jordan-Hare Stadium Saturday night.

Clemson’s defense batted down a desperation heave thrown on the last play of the game to secure the win.

It was never easy – Clemson gained just 399 yards – but Mike Williams had nine catches for 174 yards and Hunter Renfrow added a clutch fourth quarter touchdown reception as Clemson improved to 1-0 on the season. Wayne Gallman had 30 carries for 123 yards.

The win by Clemson broke a 29-game home winning streak against non-conference foes for Auburn.

Deshaun Watson was 19-of-34 for 248 yards, but Clemson’s offense never appeared to be in synch and the inability to capitalize in the second half cost a Clemson defense that played extremely well for most of the game.

The teams traded possessions throughout the first quarter, and Auburn went to its third quarterback late in the first quarter and put together a scoring drive. Jeremy Johnson entered on Auburn’s third series and engineered a drive that ended with a 53-yard field by goal Daniel Carlson, and Auburn held a 3-0 lead with 12:58 to play in the half.

Clemson answered on the ensuing drive, and they did it in a big way. Literally. 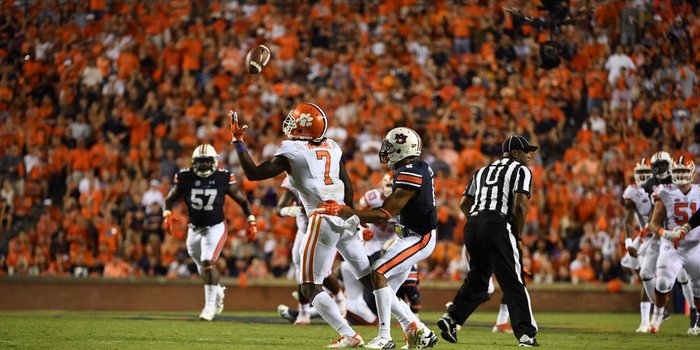 Clemson went on a 13-play, 84-yard drive that ended with a touchdown. Clemson had a fourth-and-goal inside the Auburn one, and Clemson sent in defensive tackles Dexter Lawrence and Christian Wilkins as fullbacks. Gallman followed Wilkins into the end zone – Wilkins looked like he cleared out half of Auburn’s line – and Clemson took a 7-3 lead with 7:34 to play in the half. Mike Williams caught three passes for 51 yards on the drive.

Clemson put together another drive just before the half – Willliams came up big again – and Greg Huegel hit a 30-yard field with seven seconds remaining for a 10-3 Clemson lead at intermission. Clemson outgained Auburn 233-38 but only held a touchdown lead. Williams had six receptions for 105 yards in the half.

Clemson’s defense stuffed Auburn to begin the second half, and a punt allowed Clemson to take over on the Auburn side of the field. A seven-play, 22-yard drive ended with Huegel’s second field goal of the night, a 40-yarder that gave Clemson a 13-3 lead with 10:36 to play in the third quarter.

Auburn found a little traction with quarterback John Franklin on the next driving, pushing all the way to the Clemson 36. However, Franklin lofted a high pass that was intercepted by Jadar Johnson at the Clemson eight for the first turnover of the night. Three plays later, Watson returned the favor as Auburn picked him off at the Clemson 35.

Things then got a little crazy. Auburn appeared to have a catch at the Clemson one, but a review overturned the play. Auburn was forced to go for it on fourth down, and they got just enough to keep the drive alive. Lawrence pushed the pocket to set up a third-and-long, but Auburn’s White completed a pass to Marcus Davis for 16 yards to set up a fourth-and-one at the Clemson 16. Auburn converted the short run, then faced another fourth down, with two yards to go, just three plays later at the Clemson four.

However, Johnson was stopped at the line of scrimmage and fumbled and Clemson took over at their own six with three minutes left in the quarter. The fumble was caused by Ben Boulware and recovered by Wilkins. Clemson couldn’t get a first down – another three-and-out – and after a punt Auburn took over at the Clemson 48 with 1:43 to play in the third quarter.

Auburn made Clemson pay for the offensive ineptitude, getting another field goal from Carlson that made it 13-6 with 13:46 to play in the game.

Clemson responded with a 75-yard drive that covered 10 plays and ended with perhaps the best catch of the night. Gallman had a big third down conversion to keep the first set of downs alive, and Williams had another big catch to set up Clemson in Auburn territory. However, Watson was sacked on second down, and Clemson faced a 3rd-and-16. Watson lofted a floater to Hunter Renfrow in the end zone, and Renfrow bobbled the ball but came down with it on his back for the touchdown. Huegel missed the PAT, and Clemson led 19-6 with 9:59 to play.

Clemson had another three-and-out, and after a penalty and a short punt Auburn took over at Clemson’s 36-yard line. Auburn reeled off a big run, and a roughing the passer penalty on Ben Boulware gave Auburn a first-and-goal at the nine. Kerryon Johnson made Boulware and Clemson pay with a touchdown run with 3:22 to play, and Clemson led 19-13.

Clemson took over at the 25, and Watson gained four tough yards for a first down on the second play of the drive. Three plays later, Clemson faced a third-and-eight and Watson hit Williams for a 20-yard gain. Gallman followed that with a 20-yard gain to the Auburn 23, and Auburn was forced to call its second timeout with 1:41 to play.

Clemson hammered away at Auburn for four downs, but Gallman’s final carry resulted in Auburn taking over at its own 15 with just 40 seconds to play with no timeouts.

Auburn marched into Clemson territory, but the last heave was knocked down.

Clemson opens the home portion of its season with a 12:30 p.m. kickoff in Death Valley next Saturday.

Clemson vs. Auburn Box Score
Get the latest Clemson gear right here!
Comment on this story