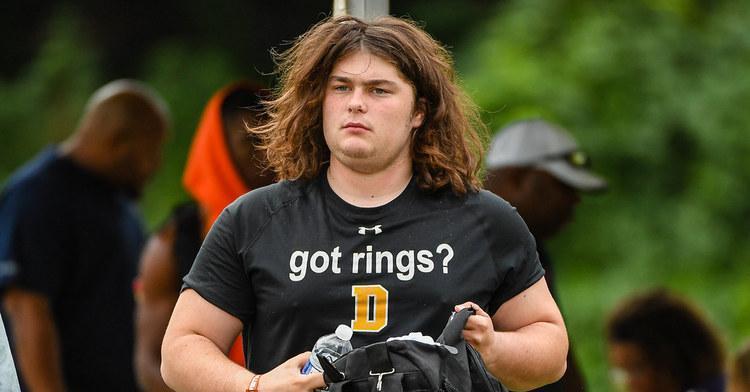 Linthicum works out at camp a few weeks ago

The nation’s number one center for the 2021 recruiting cycle has nothing but good things say about his recent visit to campus and subsequent offer.

Ryan Linthicum (6-4, 278) is a 4-star prospect out of Damascus (MD) that is listed as the top-ranked center nationally by both Rivals and 247. Rivals lists Linthicum as the No. 42 player overall regardless of position.

"I went to camp so I could work in front of Coach Caldwell," Linthicum told TigerNet. “What stood out to me was how awesome the coaches are there. And, the facilities are top notch. It's somewhere where you feel like home. It was just a great time and it's somewhere where I feel at home. I am excited about continuing to build that relationship with Coach Caldwell.”

What was Caldwell’s message to Linthicum?

"He told me that I was one of their top guys. He told me while I was at camp that they might offer, but he said that he had to make sure the entire staff liked me. I went home and I wasn’t really too worried about it. But then he called me and he sounded really excited on the phone. I am very thankful because I know what a Clemson offer means.”

Among his other offers at this point are Ohio State, Michigan, Maryland, Nebraska, Virginia, Virginia Tech, Pittsburgh, Duke, Louisville, LSU, North Carolina and East Carolina. Some of his other visits have been to Ohio State, Maryland, PSU and Pitt.

Linthicum is also the teammate of Clemson 2020 commit Bryan Bresee.

“He’s cool, but he lets me do what I want,” Linthicum said. "We’re pretty close friends, and I would say it’d be pretty cool to play with him in college. I’ve already been on a visit to Clemson with him back in the spring, so he knows how I feel about Clemson and I know how he feels, so he won't have to recruit me too hard."

Linthicum said he hopes to release a top five this fall or winter. He's eyeing a spring 2020 commitment decision.

"I want to go somewhere I feel at home,” he said. “You never know what can happen, and so if something happens and I can’t play I want to go to a place where I can still have fun and get my degree. Clemson is very high on my list. One of my favorites.”