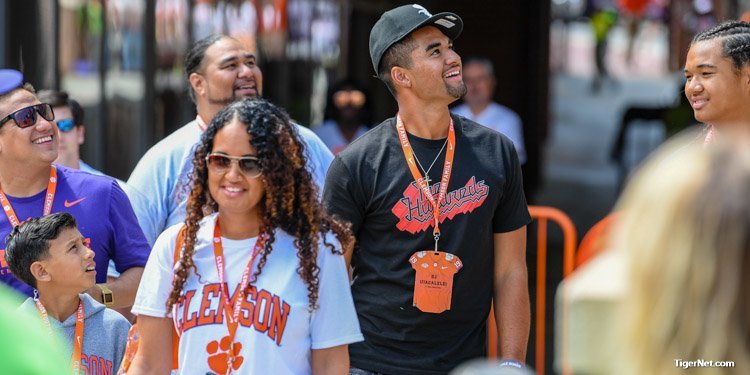 DJ Uiagalelei and his family have made their two spring visits, and now they have to sit back and make a decision.

Uiagalelei is the nation’s No. 1 quarterback for the 2020 recruiting cycle, and he made the decision a few months ago to visit both Clemson and Oregon for each school’s spring game. Following this past weekend’s visit to Eugene for the Ducks’ spring game, those visits are now in the books.

Uiagalelei told TigerNet that the Oregon visit was everything he hoped it would be, including meeting two of his idols in former Duck quarterbacks Jeremiah Masoli and Marcus Mariota.

“For me, meeting those two, and getting to sit down and talk to them. Like Masoli, I got to sit down and talk to him a little bit about different stuff. That was really cool. The same thing with Mariota - I got to talk to him on the field a little bit and take a picture with him. There were a lot of good things that happened there, but that was probably my highlight.”

What stands out about the Oregon program?

“The coaching staff and Coach (quarterbacks coach Marcus) Arroyo. It feels like family over there,” Uiagalelei said. “I like them a lot. It's closer to home, and I know a lot of people at Oregon. One of my former receivers is there. I know the running backs. They are good friends. I know a lot of the people there.”

“I am really comfortable with each coach there. Especially Coach (quarterbacks coach Brandon) Streeter,” Uiagalelei said. “I know the offense that they run and different stuff. They are both really good schools that I really like. There isn’t anything Clemson could have done differently on my visit there. They did everything right. My family loved it."

The next step is to sit back and see which school he wants to choose.

“We just want to go and sit back and weigh it out and see what we want to do,” he said. “We want to think about it and see what the options are and weigh out the pros and cons with each school and all of the different schools. And then, eventually, I will make a decision.”

It had been reported that Uiagalelei would decide on May 5th, but he says that isn’t definite.

“I am going to announce on Twitter the date that I want to announce,” he said. “I will announce the date on Twitter, but it will probably be sometime in May. But I don't have a definite date, yet."

Does he know which school he will choose?

“It's still up in the air. I am still not sure,” Uiagalelei said. “I kind of have an idea of where I want to a little bit, but still not sure yet.”