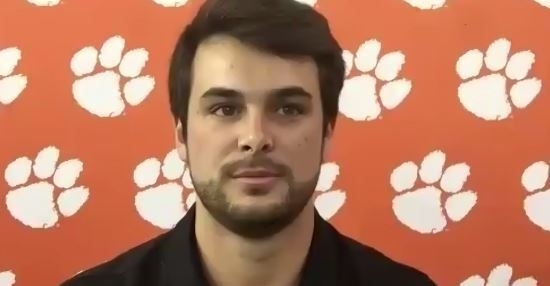 Clemson’s players met with the media Monday to discuss the Tigers’ season opener. Clemson travels to Winston-Salem to take on the Demon Deacons at 7:30 pm Saturday (ABC) at Truist Field. The Tigers are a 32.5-point favorite.

Here are some quick highlights and notes from safety Nolan Turner and linebacker Mike Jones, with stories to come later:

*Nolan said they can’t wait to get out and compete Saturday against someone other than Trevor Lawrence. He says Lawrence can make any throw. An incredible talent and a different player. This year it is so obvious how different he is back there. You have to remind yourself sometimes during practice that you don’t see that every week. He is a leader and a special guy to have on the team.

*On Trevor becoming a national voice, Turner says Lawrence has been a leader. Very mature and has been about his business. That is who he has been since day one.

*With the younger safeties, they are all super talented and they care. It has been cool to see them compete and get better and then fail and then build off of that. Lannden Zanders is a good player and super-rangy and can cover some ground. He is impressive to watch and see how his fundamentals have grown. Joseph Charleston is physical and a good tackler and understands the defense. Same thing with Ray Thornton and Jalyn Phillips. They all look like different dudes and by week six or seven everyone will know their names.

*He enjoys coaching up the younger guys. Holds himself to a higher standard. Fun to hear these guys and listen and be the older player that they listen to. He has grown as a leader throughout this time and it has been a good experience.

*Has been cool to have Jake Herbstreit at the safety spot. He has done a great job. Comes in and works hard and has been fun to build a relationship with him.

*On the young receivers: Turner has seen speed and they all move very fast. Amari Rodgers is a leader. Ballers all over the wide receivers group. They will step up and make plays, and he doesn’t expect any drop-off there.

*On the social justice movement, he feels like a lot of this is overdue and he is happy to have a platform to see things come to fruition. He wants to see that all of this isn’t for nothing. As for what they have planned for Saturday, he is not sure if he is able to say. As for being a leader, he is a vocal guy and when he is passionate about something he doesn’t hold his tongue. Feels like he has to say something. This shows what matters to him and his values. Eventually football will be over and they are thinking about what kind of legacy they will leave.

*On what Kirk Herbstreit said this past weekend: “That was powerful. And seeing that and knowing his sons are on our team is awesome. They are the same way. We had a roundtable discussion and I could tell that he cared as much about me as I do.”

*On not having fans in the stands, he says he has tried to not think about it. Once you are on the field the only thing you notice about the fans is how loud it is. Doesn’t matter at this point. He is just ready to go play.

*All of the young linebackers have been pretty amazing. He is biased because he plays Nickel/SAM and likes Trenton Simpson. He has taken him under his wing. He will be an amazing player.

*Wake has a good offensive line. They push the RB forward. They are finishers and grinders. Some talented backs. Sam Hartmann (QB) can make plays outside the pocket, can throw at any time.